Rebuilding Hope on the North Coast 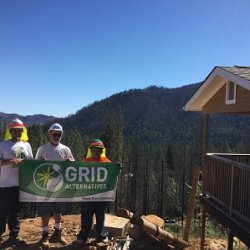 On September 12, 2015 the Valley Fire began raging through Northern California’s Lake County, destroying almost 1,300 homes. In Cobb, CA, a town with just under 1,800 residents and where the fire started, over 50 homes were lost in just the first day of the fire. By the time it was contained, that number had grown to 445.

Among the homes lost to the Valley Fire was that of Wasik Family. An elderly couple, the Wasiks had planned to spend their retirement years in their home, enjoying a quiet life on the edge of a state forest. Instead, they were faced with the challenge of rebuilding not just their home, but their lives. To make matters worse, just weeks before the fire the Wasiks had been dropped by their insurance carrier who refused to renew their policy because of their home’s forest proximity. They had yet to find a new insurance carrier when the Valley Fire began.

The Wasiks were not alone. As one of the poorest counties in California, many Lake County homeowners are under or uninsured. Thankfully, a number of groups stepped in to help with rebuilding efforts, coordinating and planning through Team Lake County meetings. One of these organizations was Hope City, which focuses on returning families home after disasters. The Wasiks met Hope City’s CEO Kevin Cox as they participated in community meetings, looking for help with their situation. Hope City coordinated volunteers from churches, civic groups, and businesses to come help for a week at a time, while also providing building materials at a discount. Through Hope City, the Wasiks and other Lake County residents began to rebuild.

From the beginning, GRID Alternatives Bay Area/North Coast (GRID) took part in the Team Lake County meetings, looking for opportunities to pair the rebuilt homes with solar and its associated cost savings. Just this summer, on a scorching 119 degree day, the Wasiks became the first family to receive a GRID solar system, nearly a year to the day after moving in to their rebuilt home. 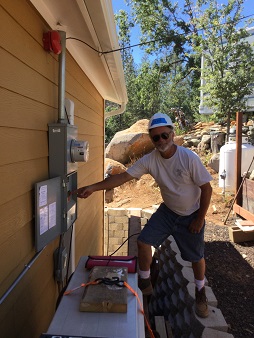 The Wasiks are excited to have their system installed not just to reduce their energy costs, but also to reduce their fossil fuel consumption. In fact, their 2.65 kilowatt system is expected to eliminate 28 tons of greenhouse gases over its lifetime. This is equivalent to planting 878 trees or taking 7 cars off of the road for 1 year!  Of their installation day itself, the Wasiks shared how impressed they were by the professionalism the GRID staff and volunteers, and by their solar being installed in one day.

The Wasik’s new solar system is set to be the first of many benefiting those directly affected by fires in the region, with an installation coming up shortly for another family in their community. As California’s fire seasons seem to grow longer and worse, and we see the effects of climate change so clearly in front of us, GRID is honored to be one small part of rebuilding hope in the North Coast communities most impacted. If anything, our worsening climate crises make an accessible transition to renewable energy feel more important than ever.

See more photos from the installation day on our Flickr album, or join this important work by signing up to volunteer in the North Coast!