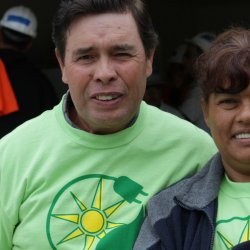 Erica Court, a normally quiet cul-de-sac in Oceano, CA was bursting with solar energy Saturday October 20th as more than 150 volunteersindividual sponsors, corporate teams, job trainees and the homeowners themselvesget up on roofs to install solar electric systems for eight low-income families during the GRID Alternatives Central Coast Solarthon. The event is an annual fundraiser for GRID Alternatives, a statewide nonprofit with offices in Atascadero that brings the benefits of solar technologyboth jobs and savingsto communities that need it most.

"Today is a very special day for me, my family, and the environment, said homeowner Marco Figueroa. I dont have words to express how grateful I am for this opportunity."

He and the other Solarthon families, whose homes were built by the county for low-income residents in 2001, will save approximately 75 percent on their electricity bills from day one, money they can use for food, clothing and other necessities. The installations are expected to save them a combined $180,000 over the 30-year lifetime of the systems, and prevent 557 tons of carbon emissions. Thats the equivalent of taking 100 cars off the road for a year.

"GRID Alternatives provides an opportunity for communities like this one to not only save money but also contribute to a cleaner environment, said Steven Fernandez, Regional Director for GRID Alternatives Central Coast office.

These systems are being provided at no cost to the families, thanks to a state rebate and support from donors, foundations, corporate sponsorships and San Louis Obispo County, which is providing a permit fee waiver for GRID Alternatives projects county-wide.

One of our primary missions at the county is to provide safe, affordable and clean communities for our residents, said San Louis Obispo County Supervisor Paul Texieria, who came out to support the event. This project will roll over 20-30 times, benefitting families for years to come.

Its not just the homeowners who benefit from GRID Alternatives program, but volunteers and green job trainees as well. Frank Walters, a volunteer team leader at the event, got his start in solar by volunteering for GRID Alternatives and now is employed by First Solar installing solar at the Topaz Solar Farm, a 550 megawatt renewable energy project in the Carrizo Plains.

Saturday's Solarthon was one of seven such events being held around the state this year, and the second annual Central Coast Solarthon. Much like a walkathon, individuals raised money for the event through their personal networks, while corporations like Wells Fargo, Rabobank, Holland & Knapp Construction, and New Frontiers sponsored homes for their employee volunteers. GRID Alternatives official solar module providers, SunPower Corp. and Yingli Americas, also had employee and job training teams at the event. Special guests during a lunchtime presentation in Oceano included Congresswoman Lois Capps and Assemblyman Katcho Achadjian.