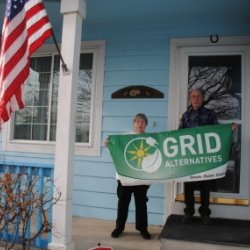 The Comptons are a true western family. Marilyn, 83, grew up in Parowan, Utah on a farm. “We didn’t have any money, had plentiful food, we had chickens, pigs, cattle, sheep…it was a good life”.

She met Dwight, 86, in Cedar City, Utah while both were working for Bell Systems. Dwight was born in the tiny town of San Acacio, Colorado in the San Luis Valley, but grew up in Colorado Springs. He was a four-year Navy veteran in a destroyer group based in Long Beach before beginning work for Western Electric.

Both Dwight and Marilyn “grew up with Depression-era parents” and knew what it meant to live frugally. They have lived mostly on a fixed income since Dwight retired in 1986, qualifying them for a no-cost solar system through Community Development Block Grant funding. Their new 5.58kW solar system will generate 7,440 kWh per year, saving the Compton’s $822 per year.

They’ve lived in their current home for 22 years–“the longest we’ve lived anywhere.” The GRID Alternatives CO solar system, funded with support from the Salal Foundation and the City of Thornton, will help these tried and true westerners continue to live the independent lives they were raised to live.

“We really do appreciate it, we’re going to be very happy when it gets turned on!"

If you or someone you know may qualify for GRID Alternatives CO's Energy for All Program, apply online, refer a friend, or reach out to one of GRID's outreach coordinators today.