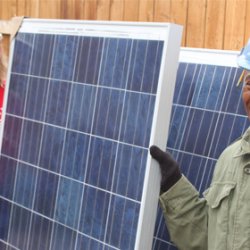 The Saxtons, both residents of Riverside County, are next door neighbors and have been raising their families together in homes built through Habitat for Humanity Riverside. They can expect to save 75 percent or more on their monthly energy bills, with the savings going to other necessities for their families.

Before we met the people at GRID, we had no idea that the sun provides so much energy. Were excited to be the first on our block to have solar energy and to educate our neighborhood about solar panels, said Jerome Saxton.

I just feel so blessed, said Tyrone Saxton, a janitor and an amateur Christian rapper who recently raised money to participate in a mission to Ethiopia through his church. He and his wife Cashandra are raising two children in the home they built together.

GRID has partnered with veterans groups across the state and in Colorado, including Swords to Plowshares and Veterans Green Jobs, to help unemployed vets get experience to find jobs in the industry, while providing affordable power to homeowners in need, many of them veterans themselves.

Other GRID Veterans Day installations included:
 A group of job trainees from Laney Green Jobs and Swords to Plowshares installed a system for a low-income vet in Richmond. Read the article from Richmond Confidential
 The San Louis Obispo Vet Center partnered with GRID to recruit four Veterans as volunteers to help install solar for a family in Guadalupe.