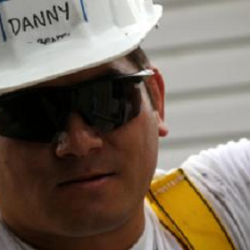 Daniel Moore was one of the first volunteers we met on Monday, and he's been on the roof with us ever since, gaining more confidence and taking more leadership with each passing day. If we had brought any orange team leader shirts, he'd probably be in one by the end of the week! Danny is a solar student at Ecotech Institute, which has been the source of many of our volunteers so far this week, and is also an intern at Veterans Green Jobs, the amazing partner we mentioned in our first post. At 37, he's got 18 years of army service under his belt, as an airborne ranger, a helicopter pilot, and a counter IED team leader. He's expecting one final deployment sometime next year.

Like many of the vets we've worked with, Danny is passionate about solar. "Our country became great in the 50s because we had access to so much cheap energy," he explained. "I realized that if we want to maintain our leadership role and set an example for other countries, we need to start finding more balance in our energy sources. Solar always sticks out in my mind as one way to achieve that balance."

He and his wife moved to Colorado from California last year so he could go back to school and get involved in renewables. When he found out about GRID, he signed up to work the whole week, and we are thrilled to have him! He and the other volunteers, many of them back for the second or third time, managed to complete one system today and prep another four homes for tomorrow's install with employee volunteers from Wells Fargo. Tomorrow is also our big open house launch event, where we'll be hosting some local VIPs and honoring our partners. If you're in Denver, look for us on Channel 9 in the morning!