Accepting the Non-Profit of the Year Award at Hollywood's Green Gala! 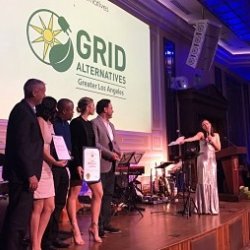 Earlier this week, our organization was honored by the US Green Building Council – Los Angeles Chapter. For our work demonstrating "leadership towards a more sustainable future," we've been chosen as USGBC-LA's Non-Profit of the Year!

“Innovation, education, and community are at the heart of what USGBC-LA celebrates in project and partnerships,” noted Julie Du Brow, USGBC-LA Interim Executive Director.  Added Du Brow: “Thanks to all the teams that are shifting the discussion on the importance of social equity and health & wellness.”

GRID Alternatives' Non-Profit of the Year honors come the same year the our regional team received 2018's Green Leadership Award from the County of Los Angeles Board of Supervisors, celebrating the program Greater Los Angeles Nonprofit Solar Opportunities. Over the past eleven months, our 2018 achievements were numerous:

Since we opened in 2007, our office has installed more than 5.5 kW-DC in the County of Los Angeles! We're honored to be USGBC-LA's Non-Profit of the Year and are thrilled to be closing 2018 on a note of triumph. As GRID Alternatives Greater Los Angeles Executive Director Michael Kadish put it— "It's an honor to have USGB-LA recognize our work. This award demonstrates that they appreciate that equity and inclusion are critical for the success of sustainability in Los Angeles."