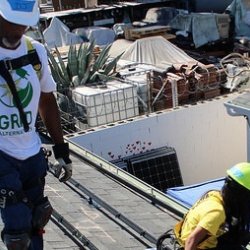 As the last week of Military Families Month begins, we're proud to share the store of Heldon Julius Jones Jr., an example of a dedicated solar trainee who quickly found his place in the Greater Los Angeles office. Heldon, or "DJ" as he prefers to be known, came to us in the fall with life experience but no solar skills. He simply wanted the chance to work. As it happened, the GRID Alternatives Troops to Solar program was a perfect match for his goals, and today DJ can look forward to a career where he has all the preparation needed for success!

"I think that from growing up in a military family, being able to travel all over the world, meet different people, different cultures, it gives you a view of different traditions and customs," writes DJ, whose parents lived in Japan when he was born. With a career military dad, his four siblings quickly grew accustomed to seeing new places. The young DJ touched down everywhere from the West Coast to West Germany; he grew to realize that he was a "people person." Working on a project with an international mission, he says, "You find out that everybody's basically the same."

DJ enlisted in the Air Force for his own military service, spending almost half a decade keeping the youngest branch of our armed forces organized. As a flight operation coordinator, he remembers, "I worked in airfield management … where my job was to change publications. Every time every month, when pilots, copilots, and navigators go out, they have books and maps that have to be changed. I would pack the flight bags." He also kept fully-fueled aircraft "online" and oversaw their maintenance; later, he did security work for the government as a contractor.

Our solar organization came onto his radar through the Department of Veterans Affairs, where a VA counselor named Denise had a relationship with then-Veterans Liaison Nick Boateng of GRID GLA. "I looked into green energy, studied on it," DJ remembers. "I came to GRID because I was looking for something new to do. I wanted to find different opportunities, including something that was valuable and exciting." With space for an SCE Serves Veterans Intern available thanks to the support of Southern California Edison, DJ was able to receive stipended training throughout the fall. As he told GLA staff during his interview for the position, GLA and our warm volunteer community made him think of a family-owned business – the sort of place he knew he'd add value.

"Working here at GRID in Construction, every [Solar Installation] Supervisor has a different way of asking you to perform that job. I've learned how to install the solar panels, how to draw the blueprint up on the roof, how to read plans, how to install the electrical and combiner boxes." DJ continued to thrive because much of his Air Force experience mapped comfortably onto solar installation training. As a young airman he had kept debris off of American runways; as a vet in training, he monitored a clean and safe workspace in the warehouse. As a young airman he watched flight schedules; as a vet at GRID, he helped schedule and deliver onsite auditing and construction services in order to deliver the best customer service for homeowners. "You can continually teach these skills," he believes, "because solar is a growing industry."

Now finished with his internship, DJ believes he could apply his knowledge anywhere: Africa or Asia, for instance. But he'll start in a green job much closer to his current home. Freedom Solar, a for-profit company hiring permit coordinators in Los Angeles, offered DJ a good job with room to grow—one where he can apply his GRID training to real projects and perhaps teach his skills to other people. "I'd just like to say how grateful I am, as a veteran, to be chosen for this opportunity."

As DJ continues to rely on GRID to grow his skills in other areas (like conduit bending), he has a reenergized sense of pride in his experiences as a veteran. "It makes you more open" to serve alongside other veterans, "and gives you a better understanding of what different people do and why they do it. I met individuals from all over the United States." Now, he's proudly helping the US make a timely transition to clean energy, and thereby continuing his military family's legacy of service. As DJ would tell you, he's "being in the moment"—and putting his energy into an impactful new career.

Special thanks to Wells Fargo for supporting our Troops to Solar initiative.