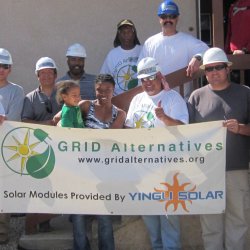 April Honore runs a childcare center out of her home. This involves long hours during the day and night as she watches and cares for as many as 8 children at a time. While families usually try to cut back on electricity use, in Aprils case, the childrens comfort has to come first. Aprils summer electric bill was double the amount during the winter. Since most of her income from her business is spent on her electric bill, April was considering raising her prices just for her business to survive! This all changed, however, when April contacted GRID Alternatives, and the magic of energy efficiency and solar transformed not only her utility costs, the lives of the families she was caring for!

April and her family received a 2.17 kW solar system in early April of 2012, which was designed to save them approximately 86.3% on their annual electricity bill. This translates into more than $25,325 saved and 85 tons of CO2 emissions reduced over the life of the system.

Through GRID IE, April took part in energy efficiency programs through Southern California Edison and has been the proud owner of a solar electric system for 8 months now. She has saved as much as possible and seen a significant reduction in her electricity bill, and has been able to pass those savings directly onto her clients. Instead of raising her rates, April was able to maintain her current fees, and even lower her rates for some families who were struggling to afford childcare.

The experience has led to April building long-lasting friendships with some of the GRID IE volunteers who helped install the solar electric system on her home. Discovering that some of them roller skate regularly at the same rink she does, they now go skating together and have invited other volunteers to join them!!