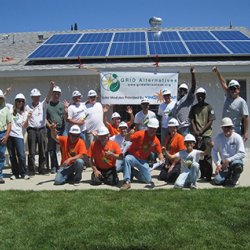 GRID Alternatives Inland Empire (GRID IE), an affiliate of GRID Alternatives, officially opened its doors in April 2011 with a small skeleton crew of five, later growing to a team of eight. GRID IE blossomed from humble beginnings. Before establishing its office, staff worked out of the home of former Executive Director and current Vice President of Regions, Bambi Tran, and used her garage as a warehouse. The original IE team even sacrificed using their own personal vehicles for work before GRID IE was able to purchase its own fleet. Each team member wore multiple hats before finally being able to move into their first office in August of 2011, and they continued to build from there!

GRID IE quickly gained momentum building a healthy pipeline of qualified homeowners who wanted a no-cost solar system. They hit the ground running with in-house installations and job training. Since GRID IE’s inception, it has hit many important milestones. GRID IE in partnership with the Palm Desert Redevelopment Agency, served almost 100 homeowners living in the Desert Rose community, an affordable housing development making it one of the most solarized low-income communities in California, utilizing Single-family Affordable Solar Housing (SASH) funding. Also, GRID IE developed the Tribal program that evolved into GRID’s National Tribal Program, starting at the Chemehuevi Indian Tribe, where 96 homeowners have been served. In addition, GRID IE also launched the full GRID model of job training to employment on the Chemehuevi reservation where 55 tribal members were trained and hired by GRID’s Sub Contractor Partnership Program (SPP) to do the solar installations on their reservation. GRID IE has also achieved several firsts among GRID regions, including launching the first Solar Spring Break program — a service-learning program that gives college students from around the country the opportunity to spend their vacation week installing solar in economic and environmental justice communities, and Solar Futures program — a K-14 education program offering classroom curriculum and hands-on training for youth, to name a few. Recent achievements also include piloting California's first low-income community solar project in partnership with Anza Electric Cooperative  and the Santa Rosa Band of Cahuilla Indians.

GRID IE is proud of the work it has accomplished over the past 10 years (GRID IE Impact), with the help of our community partners and supporters. It’s staff and Board of Directors invite you to attend its 10 Year Anniversary Virtual Celebration to commemorate this significant milestone. Look for announcement of this year's Sunshine Award recipients in the next newsletter.

Your support is appreciated, and will help continue the great work and impact GRID IE has brought to the Inland Empire. Make a donation today. For more information, contact Natasha at 951.465.2866 or nferguson@gridalternatives.org.