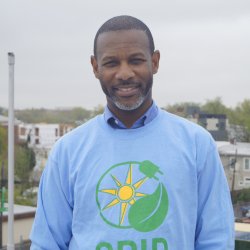 Each week during Black History Month, we'll focus on one area of Black history that connects to our mission of advancing social and environmental justice. This week, we're focusing on the historical diminishing of Black history.

Around 30 years ago, GRID Mid-Atlantic Logistics and Facilities Manager Sundiata Ramin traveled to Africa. It was the first time Sundiata went to see the land of his ancestors. In East Africa, he saw cities and ruins from the great ancient civilizations of Egypt, Ethiopia, and Sudan. In West Africa, he saw where his namesake, Sundiata Keita, ruled over the prosperous Mali Empire.

Sundiata's trip to Africa opened his eyes to a whole new reality. Growing up in Washington D.C., his Black history lessons rarely went beyond the short window after slavery was abolished in America. They focused mainly on abolitionists who fought against slavery, civil rights leaders, Black inventors, and Black individuals prominent in modern life.

In Africa, however, he saw artifacts that painted the picture of a vivid, prosperous, flourishing Black history going back thousands of years.

“Many educators wanted to disconnect us from our past in Africa,” Sundiata said. “Before there was American history, there was Black history. We had a history before we came here.”

Minimizing Black history is not new. In some ways, it is as old as America itself. Slaveholders used many methods to cut slaves’ ties to their heritage, including separating children from their parents and forcing new generations to speak different languages. Over generations, the effect reduced Black history to make it a sidenote.

The lopsided view of history presented in American culture inspired Carter G. Woodson to launch what eventually became Black History Month. His intention was to ensure Black Americans got their rightful place in American and world history.

“If a race has no history,” Woodson said, “it has no worthwhile tradition, it becomes a negligible factor in the thought of the world, and it stands in danger of being exterminated.”

Sundiata remembers his trip to Africa being educational but also painful. There was a wealth of Black history he never knew existed until he was in his 20s.

“When I learned those things, it gave me a sense of self-pride. It also told me how much I had been stripped of—how much I had been denied,” he said. “Here I am in college, about to graduate, and I didn’t know anything about Black culture in Africa. I had to reeducate myself, then literally unlearn some of the things I was taught.”

For Sundiata and millions of others of African descent, the diminishing of Black history created a false definition of who he was and where he came from.

Understanding the "glory of Africa," as Sundiata said, was key in developing a new perception of Black history. A full, accurate, representation of African history is needed to advance social justice in America today.