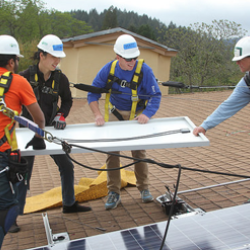 That’s what facilities manager Richard Jergenson had to say as he watched solar panels go up to the roof of the Little Lake Grange in Willits, California. The Grange, housed in a former school building, plays host to winter farmers’ markets, pancake breakfasts, and other community events, and is home to numerous nonprofits -- like Nuestra Alianza, a community acupuncture clinic, and the town’s radio station -- that serve this largely low-income community in the center of Mendocino County. It also has a commercial kitchen that helps the region’s many small farms add value to their produce and incubates local businesses.

Mr. Jergenson got inspired to get solar for the building several years ago when a neighboring Grange became the first in the county to do it. “This is Mendocino, and we are solar pioneers,” he said. “I figured if we couldn’t be the first, at least we could be the second.”

That’s when he found GRID, tabling at an open house. Thanks to equipment donations from GRID equipment partners Jinko Solar and Enphase Energy, GRID was able to do the installation at a price the Grange could afford, and at a size—11 kilowatts—that would reduce electricity bills by around 85 percent.

The project got underway in early May after a few rain delays, with a combination of local volunteers, GRID staff and employee volunteers from Enphase Energy.  Betsy Sliney, an engineer who does test automation for hardware, was one of them. She’s been with Enphase for around seven years and this was her second GRID installation.

“It’s been fun watching the system grow,” she said as the last panels went up. “This one is so big, it’s like a sea of glass.”

“I think it’s great that my company is able to support GRID,” she added, “and that I get to support them in supporting GRID.”