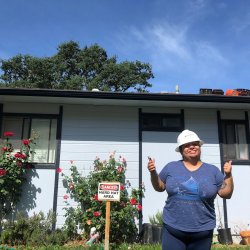 As you exit Highway 101 and drive into Redwood Valley Rancheria, you can see the scorched slopes of the surrounding hills - evidence of how close the fires came to destroying this lovely valley. The dead trees stand as a reminder even though the grass is green and lush under them. It’s been two years since the fire took several homes in this community, leaving tribal members in FEMA trailers waiting for their homes to be rebuilt.

The 2017 Redwood Complex Fire burned over 36,000 acres in the area, destroying 546 structures and killing nine people. Over two years later, community rebuilding efforts are still underway, and GRID’s North Coast team has been working with the Redwood Valley Rancheria to install solar for this hard hit community on the front lines of the fire zone. So far, GRID North Coast has installed three of the four planned systems, most recently for tribal member Tanya Estrada-Ruiz.

Tanya was so excited for her solar system that when we arrived to install she threw on a hard hat right away so she could see what was going on on the roof. Her family, like many others in the community, have had their lives further upended by the COVID-19 crisis. Her partner Francisco managed to complete his Audio Technician degree at Mendocino College during the pandemic, and as a staff member of the local Tribal Health Clinic, Tanya has been on the front lines of Mendocino’s COVID-19 response efforts. While the GRID team worked six-feet apart, wearing masks and took extra safety precautions, Tanya spoke of  her experiences taking people’s temperatures in the parking lot of the clinic before being admitted to be seen.

Mendocino county has been considerably lucky so far, with only one COVID-19 outbreak on a reservation and no hospitalizations. But the economic impacts loom for California’s Native American community, one that pre-COVID, had a 25% unemployment rate. The savings that solar can provide for families like Tanya help bring economic relief as well as a sense of pride in being part of the clean energy movement. Tanya is even looking into getting an EV charger installed!

Solar projects like Tanya’s on Native American owned lands are funded by the Tribal Solar Accelerator Fund and are made possible through GRID North Coast’s partnership with the Northern Circle Indian Housing Authority. With tribal lands excluded from the new DAC-SASH utility and state rebate program, foundation and individual support for GRID North Coast is more crucial now than ever before. To support more families like Tanya and Francisco, please consider becoming a member or donating to GRID today!