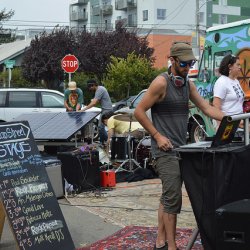 Welcome to the next installment of our Staff Spotlight feature, where we share a brief interview to introduce you to some of our amazing staff members here at GRID Bay Area! This month we’d like to introduce you to, Matt Kroll, our System Designer and self-proclaimed hippie. After making his own solar generator from scratch for Burning Man, Matt turned to GRID for job training in the solar industry and eventually became a SolarCorps Fellow. When he’s not designing solar systems for GRID’s clients, Matt enjoys making funky electronic music. Keep checking back to meet more fabulous GRID Bay Area staffers!

“I originally became interested in solar after going to Burning Man and being somewhat dismayed at how many gas generators were out there. I thought for how many hippies were there, they’d be using more alternative energy. So I started researching solar for myself and after a few months, I spent my entire tax return on solar panels and batteries to cobble together a little solar generator. I brought that out to Burning Man for the next two years and had so much fun doing that that it made me think about re-orienting my career more towards solar. Before that, I had been working in tech support. I had pretty good job security, but I had no interest in my work and didn’t really feel I was making a positive impact on anything.

I started looking for internships in solar because I knew that I wanted to get involved, but I didn’t have any skills or qualifications to just get a job. As I kept looking around, GRID Alternatives kept popping up. I started as a volunteer, and then I worked as a warehouse construction intern. After interning for a while and showing that I was reliable, I became a well-qualified candidate for a SolarCorps Fellowship.

I’m a system designer now, but I’m glad I put all my effort into interning and getting a SolarCorps position. I don’t know what I’d be doing today if I hadn’t.”

What GRID value most resonates with you?

“Collaboration resonates the most with me. In order to do what we’re doing, GRID has to leverage lots of different partnerships. We also want to get as many people involved as possible, whether that be homeowners, volunteers, job-training organizations, or different levels of government. We really couldn’t do what we do without a high level of collaboration.”

“One of my favorite moments was performing in the talent show at Staff Summit. I did a five-minute funk performance using a looper, guitar, and bass, so I was making live funk music while looping myself. I got a huge applause, which felt good after doing something I’m not super comfortable with.

Also, this past Saturday we collaborated with our neighbors at PLACE to host a community block party and we had a really good turn-out from the people who live in the neighborhood. It was great seeing lots of people from all different walks of life just having a great time on a Saturday. We were able to power a stage in front of the GRID office for seven hours using an off-grid solar system I made, which I was pretty stressed over during the week beforehand wondering if it would work.”

Fun fact about you?

“I’m an avid musician, music producer and DJ! My DJ name is Matt the Katt. Electronic music and skateboarding pretty much make up who I am. I also have a band called The Circuit Jerks. It’s a two-person live electronic music group so we make dance music from scratch using drum machines and synthesizers.”