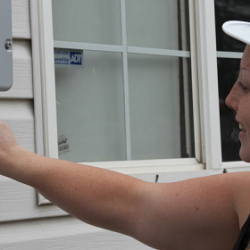 Despite a morning of on-and-off rain that forced volunteers off the roof twice, homeowner Traci Schwindt's daughter had the thrill of turning the family's system on this afternoon and watching the meter roll backward. Our first Colorado system to go live!

We are really excited about this, said Traci, who shares her modest home with her four children, a son-in-law, two grandchildren ages 5 and 2 weeks, and her dog Baby. Traci had hoped to get a solar system when she built her house 13 years ago through Habitat for Humanity, but wasnt able to. A widow of 16 years, she raised her children alone on a variety of jobs, from clerking at Blockbuster to caring for animals at an overflow shelter. The savings from solar will help a lot, especially with so many people in the house.

Ill be able to catch up on some bills, she said, take the car in.

Three of our first four systems were finished today, thanks to patient and hardworking volunteers from Ecotech, a local job training organization, Red Rocks Community College, Solar Energy International, Veterans Green Jobs, and Energy Outreach Colorado, a weatherization and energy assistance organization, plus a few volunteers who showed up from as far away as Florida (!) to work with us this week. With a little luck, well dodge the rain again tomorrow and get our next three homes prepped for panels.

Above: Traci turns on her system for the first time.