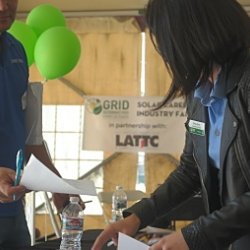 Within GRID Alternatives' Greater Los Angeles community, our Workforce Development efforts bring direct help to those we need to build a diverse and skillful workforce. We train individuals on real, solar-ready roofs; ready them for employment in one of the region's more than 20,000 paid positions; and for about a hundred of our trainees a year, we succeed directly at securing job placement (while preparing many others to pursue their own directions in solar and related paths). Our relationships serve as a bridge connecting solar businesses of all sizes to the next generation of talent, drawing from some of the same populations where we make clean power attainable for underserved groups.

That's why about 200 workers and job-seekers with the skills to sustain our thriving solar industry look forward to attending the Solar Career Fair we put on every spring in the Los Angeles Trade Technical College quad. Located at the nexus of Downtown Los Angeles, South L.A., and our regional freeway system, Trade-Tech is where thousands of people go annually to become job-ready and build their networks. It all makes Trade-Tech a perfect setting for a Solar Career Fair focused on giving employers exposure and making sure that those who are ready to fill a job match can showcase their expertise in the best possible light. GRID GLA provides unique inroads for those who are serious about hiring, year after year … and for nearly 250 guests who showed up at this year's Solar Career Fair, 2018 was no exception.

For this year's free event, we played host to several new team representatives from our growing field: from nationwide and international installers like Tesla to installers concentrating on the local market, like Mega Solar Inc. in Chatsworth. For these and about two dozen other exhibitors with human capital needs, the Solar Career Fair facilitated their goals for human resources, local connecting with trainers, and even marketing their service. Southern California has more well-qualified solar workers than ever before, thanks to the accessibility of GRID GLA's free Installation Basics Training (IBT) and complementary classroom offerings like the Photovoltaic Installers Program at Santa Monica College. Since GRID GLA has always allowed community partners to take advantage of the outreach potential at the Solar Career Fair, there were great chances here on campus for aspiring students of solar to figure out their next educational steps—and when they weren't busy with that, it was easy to take complimentary head shots, get feedback on their résumés, and hear from speakers!

As GRID GLA Workforce Development Manager Adewale OgunBadejo noted in remarks to attendees, the Solar Career Fair is one of the linchpins to realize a vision for renewable energy that represents all people: "Disadvantaged communites need, and deserve, these possibilities going forward," he said, and that means promoting local employment in an sector poised to deliver massive, transformative benefits to society. He introduced Carrie McKellogg, the capstone speaker for the afternoon, who spoke directly to the collaborative aspects of tomorrow's workforce. Government partnerships and incentives around everything from retraining to contracting, she noted, are available to industry leaders with a willingness to participate. And in the spirit of social enterprise, organizations like GRID GLA that support the solar job pool during every stage have a great role to play in assisting candidates, companies, government and policy experts, and even philanthropic funders to make 21st century economic developments a valuable change for everyone.

President Laurence B. Frank, Trade-Tech's longtime leader and a key supporter of the career-technical work we do to promote hiring, put the situation well: "We have everybody here today." Career fairs deliver benefit by exposing all in attendance to exactly what they're looking for, no matter how far along they are on their journey. A big thanks from GRID GLA goes out to the community partners, employers, fair vendors, and the Los Angeles Department of Water and Power (our sponsor) who made another opportunity-rich Solar Career Fair possible and thereby provided support to those invested in good solar jobs. We'll see you next time!