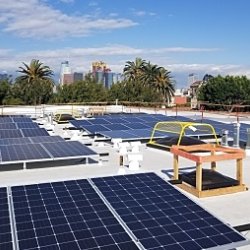 What sort of history is intertwined with environmentally-disadvantaged communities in South Los Angeles? As many of you who have spent years living on this part of town and others who've spent their energy studying California's story can tell you, local history runs deep here. While the land making up South Los Angeles has been an official part of our city since well before 1900, the look of the neighborhoods that form the landscape here has changed dramatically over time, as have the challenges of living here. Today, between 500,000 and a million people call this side of town "home."

Perhaps there's a case that South Los Angeles' modern story began in 1948, when the age of racially-restrictive covenants ended with the Supreme Court case Shelley v. Kraemer. In the years following that ruling, large numbers of California's African-American citizens built new communities for themselves outside of Watts and the area just south of Downtown. They purchased or built homes, opened businesses that increased employment opportunities and necessary services, and put down roots! In the process, they gave birth to much of the rich culture that exists across South Los Angeles' wide sprawl: Vermont Knolls, Leimert Park, Baldwin Village, and more.

But in the era before the American Civil Rights Movement, it's also important to recognize that the culture, progress, and wellness of the Southern California African-American community was impeded by some of the most aggressive environmental infringements we can imagine. Famously, the extension of Interstate 10 through the Los Angeles Basin (to make the Santa Monica Freeway, or what would come to be called, ironically, the Rosa Parks Freeway) split many predominantly African-American parts of the region into separated halves. By running a big, segregating highway through the largest concentration of African-American homeownership – cutting many south-of-the-10 residents off from economic opportunity in the process – Los Angeles ensured that South Los Angeles would integrate more slowly than the rest of the city. Furthermore, the infrastructure itself imposed an environmental burden on a minority community and diminished its air quality, especially as traffic exploded during the automobile boom of the 1950s and 1960s.

Ever since, South Los Angeles' complex history (including its periods of social upheaval since 1965) has been defined by shortages of access. Even as subsequent waves of immigrants reshaped the demographics here, poverty has remained stubbornly present … and efforts to create green communities have seen only partial success. The economic golden years that successfully enriched other parts of Los Angeles often failed to leave a mark on unique neighborhoods like Jefferson Park and Harbor Gateway. Meanwhile, shortsighted investments in dirty fuel industries (like oil drilling in Southwest Los Angeles County) compounded the hardships imposed by freeway construction and discriminatory local policies, by limiting the ability of families to live healthy lives.

Now we find ourselves in a solar boom that's a partial factor in rejuvenating job growth in California. While postwar manufacturing careers have dwindled, the demand for residential, commercial, and even utility-scale projects with experienced construction personnel is skyrocketing. But what is the cumulative impact of all this hiring and installing, specifically as it pertains to solar? Will new, renewable energy being added to the grids of utilities like Los Angeles Department of Water and Power and Southern California Edison be located just in affluent neighborhoods, places where the relatively comfortable majority of homeowners get bill savings that low-income Angelenos can't access? Will this lack of access in low-income communities mean that solar technology is just another luxury item?

Our vision suggests that we should pursue a different kind of transition to clean power. That's why we're investing whatever we need to invest in making sure that solar savings reach those who reside and do business in South Los Angeles – especially multifamily solar, which is installed on the roofs of those statistically more likely to be in poverty. Where GRID Alternatives solar can provide financial relief for South Los Angeles electricity customers and pathways into careers for locals underrepresented in the solar industry, it becomes a great tool for the "forgotten Los Angeles" to see economic development. And when we perform the simple act of installing in South Los Angeles, within communities that have shouldered massive burdens from drilling, dumping, freeway-building, and manufacturing, we've framing an important choice:

Communities on the front lines of environmental injustice need immediate, widespread access to the jobs and savings that accompany new technologies like solar. They should have solar panels that are plentiful in their communities, and just as importantly, visible on the blocks where they live. That's because smokestacks rising up from our blocks and barrios, urban oil derricks at work, and hazzardous waste signs by our schools are symbolic. Solar represents a preferrable alternative to the old types of economies that touched South Los Angeles – dirty industries that extracted much too high a price from disadvantaged populations. The more clean, safe energy South Los Angeles is producing, the more financial benefits are flowing into neighborhoods that have seen historically low levels of external investment – and the faster Angelenos are transitioning away from electricity's coal- and oil-driven heydays, towards the sun-powered alternative.

South of I-10, Alegria community members that recently brought GRID solar onto a building located by a harmful oil well are a powerful reminder of what's on the line. If communities like Alegria can fully realize the benefits of solar energy, then it's certainly possible nationwide. But what the Alegria project process also reminds us (with support from The 11th Hour Project, a program of The Schmidt Family Foundation, creating the opportunity to do multifamily in an important neighborhood and equipment donations lowering significant GRID costs) is that it takes all kinds of support to effect a true transition. We're poised to have our biggest year in Los Angeles in 2018, and yet its important to stretch our goals as far as we can. With each project like Alegria, we recognize that there's urgency to our work, and that environmental injustice is only going to continue unless we can name it plainly.