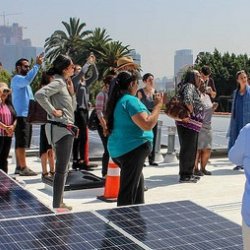 May 10 was an important milestone in the growth of GRID Alternatives Greater Los Angeles, as our first installation for tenants in the City of Los Angeles was officially unveiled on the roof of the affordable Alegria apartment building. Multifamily solar work is a strong and growing program in the GLA office, appropriate given the huge potential benefits for families and solar industry trainees that renewable energy access offers renters with the highest need. For more than a year, our team had been keeping our fingers crossed that we'd have an opportunity to design and install a system for Esperanza Community Housing Corporation, an operator that's served South Los Angeles for three decades based out of a its headquarters in a converted garment factory a mile from Downtown Los Angeles. When we joined Esperanza and their environmental justice champions at Alegria to flip the AC disconnect in University Park for the first time, it felt like the start of something very big!

On the building's front alcove steps, tenant Victoria Mercel spoke passionately about the sacrifices she and her family had endured over the years as tenants. By her own account, the no-cost solar system that Esperanza had received was an important symbol of investment in the neighborhood. Esperanza Executive Director Nancy Halpern Ibrahim noted that a few years from now, apartment buildings like Alegria will be using solar technology in a widespread way – thanks to the California Energy Commission. But, she noted, "We're ahead of them."

There are multiple ways that Esperanza offers help to high-need communities in Los Angeles – the education of health Promotores and the innovative community space at Mercado La Paloma, to name a few. But this organization is most familiar to those who follow environmental news because of its involvement in a decade of low-income community advocacy concerning environmental threats in and around the Figueroa Corridor. As the Los Angeles Times has documented, Esperanza's staff and tenants allege years of harm to residents because of an urban oil field that's operated just a few hundred feet from a vulnerable population. And while the Office of the Los Angeles City Attorney and other authorities have been able to hit the "pause" button on this drilling in the past, a lot of health problems remain. Meanwhile, grass-roots voices like Nalleli Cobo (one of Liberty Hill's Leaders to Watch in 2018) have been unwavering in their demand for operations at the site to end permanently.

The environmental justice case is clear: South Los Angeles deserves better than dirty industries like oil, and green power is part of the solution. When a grant from The 11th Hour Project (a program of The Schmidt Family Foundation) allowed Esperanza to add solar atop a new roof on one of their buildings, GRID Alternatives was honored to lead the construction of a 35-kilowatt system.

What our Solar Installation Supervisors, volunteers, and youth from Conservation Corps of Long Beach were able to accomplish is visually stunning: almost a hundred panels, connected to Enphase Energy invertors, that draw on the limitless energy of the sun to produce power that will provide stakeholders economic security. In fact, the Alegria system will have a clear impact on the lives of residents, since some of the solar installation's revenue will cover the maintenance of a new onsite media lab and allow Esperanza to offer wireless internet in the common room. But equally important is the contrast between Esperanza's forward-looking energy vision and the oil operation across the street. As Executive Director Michael Kadish pointed out, seeing GRID Alternatives solar here in South L.A. challenges prompts us to ask whether society will "invest in clean energy for all" or "continue to deal with the negative impacts from fossil fuels."