GRID's "How I Got Here" Series: Anthony Romero 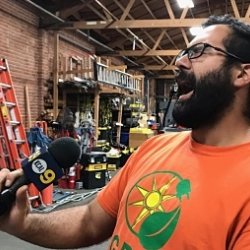 This is the latest in a series of regular profiles introducing the GRID Alternatives Greater Los Angeles staff. In their own way, each member of our team brings a passion for renewable energy to the day-to-day work of Los Angeles' most socially-minded solar company. Here's how one of them got to that point: Anthony Romero, Logistics and Safety Manager.

An unlikely fact about Anthony Romero (aka "Tony" or "T-Rex") is that he wasn't the first person in his family to go into the solar energy industry. In fact, his older brother has worked in solar warehousing for longer. But in spite of the two Romeros choosing to work in similar environments, what Anthony does each day as the inventory, logistics, and safety point-of-contact for GRID Alternatives in its Greater Los Angeles warehouse is different and special. Over the time that the two have spent in warehouses – each of them has done it for half a dozen years and counting – Anthony knows he has grown, taken on leadership, and utilized his growing set of skills to directly assist others.

Anthony's journey began in an unassuming room with Brano Goluza, a Photovoltaics instructor who leads a successful training program at Los Angeles Trade-Technical College near the GLA office. He chose solar classes on the recommendation of a friend, even though he wasn't sure how the skills would apply to his job managing inventory. What set off a lightbulb in his head was hearing from Workforce Development Manager Adewale OgunBadejo, a presenter from GRID. Adewale explained that the solar industry was hiring actively, but that experience outside the classroom was a valuable complement to classroom knowledge. Anthony wanted to roll up his sleeves, get some hands-on knowledge, and volunteer with the GLA Construction staff.

Starting at our 2013 Solarthon, he did exactly that. Often, he liked going to residential solar projects and spending time in the GLA offices more than he liked his warehouse job. Anthony applied to a yearlong training position at the end of 2014. He was accepted into the Construction Department, and from then on, he got to travel to GLA's Carson office every morning!

"I always advise people that you have to have the motivation to keep going," Anthony explains. He demonstrated it from the beginning at GLA. "People ask, 'How long does it take me to learn solar?' and we like to say, 'That's really up to you!'" Part of GLA's office culture is allowing smart and talented individuals to take ownership of pieces of our work. Just a few months into his term at GLA, Anthony asked to have a more active role in oversight of the Carson site's warehouse facilities.

In addition to working on inspections, service calls, and site visits during that first year, Anthony made our operations better and more profitable through a commitment to process improvement. He started managing the warehouse in an official capacity in 2015. Since then (and since GLA's move to our current facility), he has distinguished himself to everyone passing through our doors by approaching safety and solar construction with an intelligent and serious perspective. It's a combination of GLA's unique environment and Anthony's own initiative, he thinks, that has helped him rise above other solar warehouse professionals in terms of his understanding.

With his most recent role, focused on emphasizing safety in every part of our training culture, Anthony is an important spokesperson for the values we hold. "Our mission at GLA always makes us put safety first," he says. Starting around 5:30 every weekday, he is thinking about how to incorporate the culture of safety into the work we do inside and outside GLA's space. "Part of that [safety culture] is ensuring that we're ready for all our staff and volunteers. How we present ourselves with safety is very important."

Anthony knows that each of us can become even better at GLA, and he models the commitment to self-improvement accordingly. In-between leading certification classes, managing equipment from the forklift to the telehandler, and spending time with trainees, he is passionate about running. Anthony's a self-described "ultra marathon runner" who compares the feeling of running a dozen miles to getting on a ride. He's always looking for fellow runners, too!

Spending time with Anthony at GLA is a valuable experience to learn about solar, but also about consistency and determination. "And what I do in our warehouse is about more than just presentation," he says. "It's part of the lifestyle here." We're lucky to have a model like him, and look forward to his important role in the year ahead!