GRID's "How I Got Here" Series: Sage deLisser 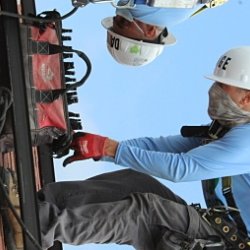 This is the latest in a series of regular profiles introducing the GRID Alternatives Greater Los Angeles staff. In their own way, each member of our team brings a passion for renewable energy to the day-to-day work of Los Angeles' most socially-minded solar company. Here's how one of them got to that point: Sage deLisser, Solar Installation Supervisor.

A recent success story who completed all his goals for his first almost-year at GRID Alternatives (as a Fellow in the SolarCorps national program – see our webpage for more information!) Sage is a budding solar construction professional based in Los Angeles. Having studied towards a degree in the Earth sciences back East, and then utilized that degree upon graduation to become a teacher, Sage always looks forward to mastering a different type of teaching with the Greater Los Angeles team: training others on their pathways to work on renewable energy. After living in the South for many years, he relocated to Los Angeles during a challenging time to immerse himself in everything going on in the "Solar Capital" and eventually hopes he will pass some of his learned skills along to others.

Sage lives in Central Los Angeles, and he has opportunities there to nurture his interests in culture, music, and self-development. Much of the rest of the time, he's on the roof with Construction! As of the date this was written, GLA is well on its way to completing its 2021 single-family installation work for 100 homes in Los Angeles County, Orange County, and Ventura County … and Sage has been part of nearly every one of those builds. His ever-growing skillset ranges from doing a roof layout to starting and removing penetrations, from working with homeowners during the post-install phase to checking the entire property for high standards of safety.

What's more, Sage's dedication has kept our Construction operation running—even during very busy times. Throughout a typical week, Sage might spend some of his working hours going out to site visits in urban and suburban communities, ensuring that our unobstructed pipeline continues. Along with his manager for the year, Peter Barragan, Sage focuses on the operational excellence that we like to deliver and make sure we're always ready to help economic and environmental justice communities at the beginning of each workday day. In fact, according to Construction Manager Jonatan Escalante, Sage was a great team player during the pandemic: "Thanks to his dedication during these months, he has been able to successfully fulfill multiple responsibilities, his dedication allows him not to be afraid of anything." We're proud to have someone this honest and service-minded represent us on the streets, and on the roof!

A few months ago, Sage had an opportunity to reflect on what he's learned since his arrival at GLA. "I've gotten to see a lot of the stuff we talk about with equity," he says, "and even though I can't always be there [for every meeting] that's something that I know I wouldn't have at a lot of other companies." In fitting with our mission at GRID, Sage is able to see the work that he does on roofs and at the GLA office as part of a wider movement to expand solar throughout California.

So what's next for him? As we head into the hottest months of summer, Sage has many chances to try his hand at the new challenge of leading installs. In July he was given the responsibility for the first time on a handful of projects, and by his latest installation in Santa Ana, he was working naturally alongside other SISes and 2021 SolarCorps Fellows.

Thanks to the work Sage and the team did that day, a family below the area median income will become proud GRID clients, saving money on their next bill. And they'll be able to say that they're taking part in the fight against climate change, adding more renewable energy onto the grid during heat waves when infrastructure is buckling under high demand. It's all just more reason for us to be proud of how far Sage has come in his personal and professional leadership – a Solar Installation Supervisor who's ready to do his part with a positive impact on Los Angeles and a sunny outlook on life!