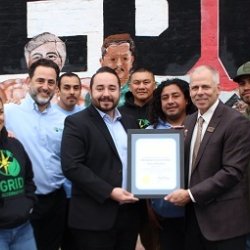 In the fall of 2018, GRID Alternatives staff members and SolarCorps participants who had trained with Homeboy Industries (Los Angeles' largest antigang and recidivism program) rolled out to Boyle Heights, east of Downtown Los Angeles, for an exciting project. After years of planning, GRID Alternatives Greater Los Angeles was able to bring a no-cost solar system to Homeboy's center on 1st! This location, which is home to a charter school, resources, and an important presence in the community, was the original home of Homeboy in its early years.

As part of our Workforce Development focus on returning citizens, organizations that operate wraparound services like Homeboy refer many individuals to solar training. We're happy to offer our services to almost a hundred Homeboys each year, all completely free. But for individuals like Solar Installation Supervisors Darean Nguyen and Natalie Andrade, putting panels on the Homeboy roof was an exciting way to give back to people who had done so much for individuals who needed a hand.

Just before the holidays in December, we brought together individuals from across the neighborhood and Los Angeles' wider community to celebrate the Homeboy-GRID partnership and "flip the switch." Along with GRID individuals beginning their solar career path (like SolarCorps Construction Fellow Salvador Miranda), we welcomed representatives from the East Los Angeles Skills Center team and social justice leaders like Homeboy Chief Executive Officer Tom Vozzo. What everyone in the crowd had in common was a willingness to celebrate personal growth and change, reflected in the faces of so many GRID solar professionals who once came to Homeboy from incarceration.

As Volunteer Training Coordinator David Andrade noted at the begining of this cool morning, "I am a proud re-entry success story." From Workforce Development leaders like David – who helps dozens of at-risk individuals get a solar job each yea – to members of the GRID staff like Emerson Rivera – whose graduated from a SolarCorps Fellowship in project management to hold a vital role on our team – Homeboys and Homegirls have joined GRID's community to accomplish exciting things for themselves and their families. We were moved when David introduced Homeboy founder Greg Boyle, a Jesuit priest who has spent years changing lives of individuals impacted by stigma and personal difficulties. 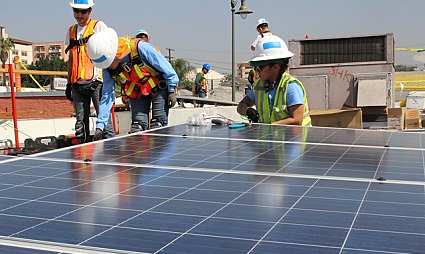 As Father Greg described "the importance of hope" in former gang members and returning citizens' leaves, we got to reflect on all the hope that our partners had been able to deliver individuals through projects like this one. Skylar Funk, a member of the band Trapdoor Social and a longtime supporter of our nonprofit work, noted how years of commitment from him and his band members to secure money for GRID's proejct had paid off when he spoke after Father Greg, Tom, and Michael. Youness Scally from Everybody Solar, who was also a key funder for our Homeboy installation, joined us for a photo at the main service panel too! It was a dedicated group of community-minded leaders. We're extra proud to train many more individuals in the years ahead, and this finished system reminds us of how much we've already accomplished. 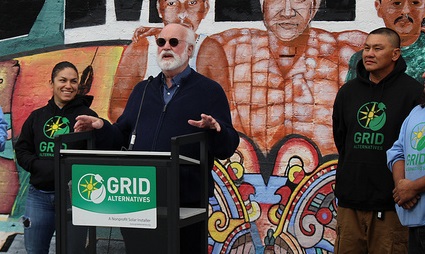