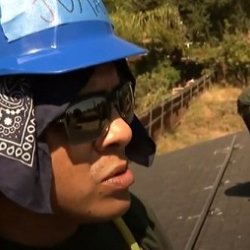 During this time of year, the spirit of the holiday season motivates us to help those who are less fortunate. That help can come as opportunities for those seeking work—especially in solar! It's a perfect time to reflect back on GLA's last end-of-year campaign to help Solar Jobs and Second Chances reach individuals in our training program.

Workforce Development programming in the GLA region has included reentry individuals for more than five years, because all studies show that after leaving incarceration, the security of a job is linked to dramatically lower rates of recidivism and better reintegration into our communities. In Los Angeles' fast-growing solar industry, we knew that there was an opportunity for formerly-incarcerated trainees to start clean energy careers—but that learning construction with us would only be financially possible for some reentry individuals if we could offer them a period of paid training. That's why we focused our 2017 year-end giving on expanding Workforce Development's existing internship opportunities to include an hourly stipend for two reentry individuals.

Our dedicated community, our wonderful donors, and even GLA staff stepped up! Through receiving 100 donations of all sizes totaling more than $14,000, we were able to allocate resources for two young people to get paid training in the first half of 2018. After a very competitive round of interviews, GLA brought Juan Gomez and Byron Bonty into the family as reentry interns in our first Solar Jobs Second Chances cohort! Both young men had been justice-impacted in the past, but now felt enthusiastic about getting a new start in renewable energy.

Today, both of our trainees are continuing their careers with the benefits of GLA experience and solar training! Juan, a resident of Bell, has trained with the International Brotherhood of Electrical Workers – the local chapter of our electrical workers union. Between his IBEW training and Installation Basics Training (IBT) certification, he continues to grow his construction résumé. And Byron, of Southwest Los Angeles, has continued to pursue his dream of becoming a business owner, where he knows he'll draw on his background in electrical work. You can see him successfully laying panels on a residential solar project in Bloomberg Philanthropies and Radical Media's forthcoming National Geographic Channel documentary, Paris to Pittsburgh.

Byron's confident that the 2017 year-end giving opportunity had an impact on him because they offered Juan and him chances to contribute and help the community. He told us, "I love to make the homeowners happy […] Since reentering, I'm more of a humble person." And Juan remembers: "During a time when I was getting tired of the way things were going for me, this program gave me a chance to learn something new." Regardless of their past challenges, both trainees plan to remain involved in solar.

We hope our donors and supporters feels as much pride as our Construction team feels that GLA built a successful internship model offering paid training to the reentry population. With additional funds, we've taken lessons learned from our pilot and successfully expanded the cohort size to up to eight reentry trainees. One participant at a time, the GLA community is blazing a trail that will set an example for the rest of the industry.