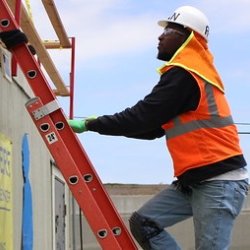 We recently caught up with Ryan Shelton, a member of the 2019 SolarCorps class who has been growing his solar installation skills with the Greater Los Angeles since 2018. Like all of our SolarCorps Fellowship members, his participation in more than a year of full-time work here has given him valuable grounding to start a renewable energy career. In Ryan's case, moreover, being one of our first two Multifamily SolarCorps Construction Fellows has immersed him in a wide range of skills that will be invaluable in California during the age of California Solar on Multifamily Affordable Housing (SOMAH) financial incentives. Ryan's story – a journey from hardship in an under-resourced community to  workforce readiness – is proof that the future of our industry offers everyone a place at the table.

Just a few years ago, Ryan was a teenager without many options to contribute to the society around him. Raised in the suburbs of Southern California, he ended up incarcerated for multiple felony charges. A desperate sense took hold in his mind: that no opportunities for non-temporary employment would be within his reach. But through Conservation Corps of Long Beach, he was able to get a second chance at sizing up job options – and through a partnership between CCLB and GRID Alternatives, he found his calling in solar energy.

While roughly a dozen members of his CCLB solar training cohort in 2018 got important construction experience and basic safety training during their installs with GRID, Ryan felt that the work of being an installer really stood out: this was a viable career. In discussions with Workforce Development Manager Adewale OgunBadejo, he charted out a series of steps that could help him fully put his conviction behind him from a professional standpoint, and recast himself as a clean energy professional ready to be hired. He would be challenged: getting classroom training in photovoltaics would require long hours of school, tuition, and motivation, while CCLB would assist him with getting his criminal record cleaned up. But Ryan knew that he had the motivation to rise.

Understanding that resources and support can help a young man achieve his full potential, Adewale made sure that Ryan was considered for our first cohort of Solar Jobs Second Chances reentry job trainees in late-2018. Ryan entered that new period of paid training with a reinvigorated desire to learn, and he worked on more than a dozen residential installations. In August, he applied for a SolarCorps Fellowship. GRID needed young, ambitious individuals who were ready for construction careers and had lived experience in low-income housing, and we were honored that Ryan accepted our offer to bring him onboard as a Fellow.

Around the beginning of his current Fellowship, Ryan spoke to a group of Wells Fargo leaders in Long Beach who had sponsored his initial CCLB opportunity with GRID. "Now I feel ready to start my career," Ryan told the event guests, speaking not just to them but to the Long Beach community that he now contributes to. After working on multifamily projects and residential solar alike during early-2019, Ryan finds himself two years away from a degree. And perhaps even more importantly, he knows in his mind that his year of service and learning will set him on the road to owning an electrician business, work he can do partly out of the home he wants to buy next year with his wife. In achieving these goals, Ryan will give California the ability to operate sustainably while also clinching a sustainable foundation for his family.

"I want to keep an eye on the chance to work for myself," Ryan says today. When he realizes this dream, it will be largely due to his work ethic and intelligence. But those assets might not have been able to shine if it were not for paid training that was made possible through foundation partners, benefactors in the corporate sponsorship community, and the support of those who love Ryan as their own. Just over a year since his solar journey began, he stands taller than ever.

The SolarCorps Fellowship Program is part of the AmeriCorps network of programs. SolarCorps is made possible with funding support from AmeriCorps, AmeriCorps VISTA, and Bank of America. AmeriCorps is a program of the Corporation for National and Community Service, the federal agency for volunteering, service, and civic engagement. CNCS engages millions of Americans in citizen service through its AmeriCorps and Senior Corps programs and leads the nation’s volunteer and service efforts. For more information, visit nationservice.gov.