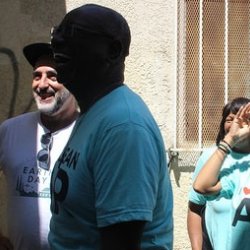 GRID Alternatives Greater Los Angeles has worked with the young people in training through Conservation Corps of Long Beach to put more than a dozen panels of clean, money-saving solar cells on a rooftop used by the community in Los Angeles' Watts neighborhood. Watts, legendary for the powerful bonds between its residents and tight-knit culture they share, is a priority for solar installation because of a decades-long pattern of low investment in new technologies that will benefit the neighborhood. At the same time, the regional lack of efforts to put good jobs in Watts has led to high and cyclical occurrences of poverty. And the impact of L.A. industry, traffic, and environmental neglect has led to direct harm to Watts residents and elevated the priority level of delivering environmental justice.

Thankfully, the Watts Clean Air & Energy Committee has elevated awareness of these challenges through the work done by its all-volunteer membership. Local leaders like Mac Shorty (of the Watts Neighborhood Council) and figures like Larry Dozier (of the St. John's United Methodist Church family, by the Blue Line station) provide information to all the area's families. They highlight the impediments to good air, water, and quality of life that Watts faces. And they trumpet the opportunities to help those most affected in Watts by pursuing greener options in mobility and power – and by ensuring that Watts is part of the green collar workforce.

The Committee worked with partners to select a pitched rooftop on a building behind the main church of St. John's UMC for new, visible solar panels. Going green (with GRID!) would allow organizations that meet in the space and do office work there to keep their tight budgets under control; lowered electricity bills would also allow Dozier to enhance the services he offered needy parishioners onsite. With the support of Sierra Club and its Beyond Coal campaign, funds were set aside to bring 6 kilwatts online in the heart of Watts. When CCLB's work on the roof was done, we joined with local officials and the delighted Watts stakeholders themselves to flip the switch on an innovative symbol for environmental and historic change.

The GRID-installed system's first day of production took place on September 8, right in the middle of National Drive Electric Week. As they did in 2017, Watts' environmental activists held a free resource fair and drive event around the growing marketplace for electric vehicles. Their message was clear. Watts could benefit just as much as more privileged communities do from clean driving, and consumers had a way to save money by going electric. In solidarity with our Watts neighborhoods, we would love to see the Committee's work on transportation continue: Watts should have public charges, more large-scale solar, and continuing commitment to equity from the Los Angeles Department of Water and Power throughout the next year.

Watts native Food4Thought was commissioned to write an original work to inaugurate the Watts solar system—and to perform it with his wife and partner, Socks. Imagine a Watts celebrates the prospect of a community drawing on its own strength to utilize the resources its own people need. Energy, opportunity, traveling through a clean community: these are goals that Watts' leaders pursue with a passion and sincerity few other neighborhoods can match. Installing in frontline communities day in and day out, we can't think of a more appropriate way to bring the residents of this city a green triumph!