Solarthon's first weekend of installs is a success—and we're ready for more! 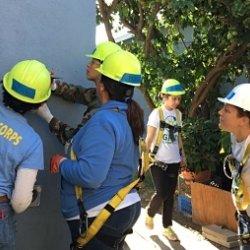 As Veterans Day approaches, we're proud to be running a record-setting Solarthon: a large collection of houses for whom GRID Alternatives Greater Los Angeles will install on nearly-consecutive days. This year, we're putting no-cost clean energy on rooftops across the City of Los Angeles. Every year that we do Solarthon, we manage to prove in ebullient and effective fashion that we're a one-of-a-kind installer: our unique model brings out supporters from across the community. Whether they're donors or partners, everyone involved in an event like this has an opportunity to be part of our movement hand-in-hand with other great people, and Solarthon supporters benefit from a special opportunity to see every angle of the process GRID employs: how we raise funds for our work, help families go green, and leverage training opportunities to put the actual photovoltaic equipment in its new home.

Solarthon kicked off at this start of this weekend with two great installs, perfectly highlighting the diverse cross-section of Los Angeles brought together in the name of solar. In Northeast Los Angeles, a Hillside Village veteran named Leonardo Gonzalez had a relaxing day mingling with local friends of GRID, including staff working for Councilmember Jose Huizar (14th District of Los Angeles) and Board Member Jess Tirado (who grew up a few miles away near Mt. Washington). As Leonardo watched, a special team of Solarthon volunteers brought him the benefits of GRID solar. More than half of those installation volunteers were Wells Fargo employees, who had driven in from across the Southland to be part of a special day of impact. By the time the day was done, a military veteran family had gotten a complete system, while people from the surrounding blocks had come out to celebrate and be educated.

Meanwhile, IBEW Local 11 tradesmen had mounted an L.A. Solarthon 2017 roof in the San Fernando Valley, giving longtime area residents a twenty-two panel system. We've previously worked with the International Brotherhood of Electrical Workers to demonstrate the innovative potential of GRID's workforce development model. What we found in Pacoima was that these journeymen bring deep and valuable knowledge of electrical installation to any GRID project, and that their considerable experience can be augmented by the presence of Solar Installation Supervisors. In true Solarthon fashion, everyone appreciated our installation family's boundless hospitality.

We also took a day in South Los Angeles to put half a dozen talented women to work on a WEBuild. This women's install was the latest in a long line of opportunities for us to encourage women in the industry, and we know that the success of these first three houses set the stage for more successes in the next couple of days! In the Solarthon builds to come, we'll be bringing more solar to veterans of the United States Armed Forces, a fitting tie-in with Veterans Day in one week. If you'd like to come by one of these installations and explore the impressive things we're accomplishing in more depth, contact Danny (dhom@gridalternatives.org).