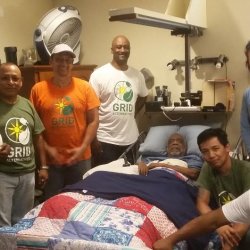 Here at GRID Alternatives Greater Los Angeles, we are proud to engage veterans through our Troops to Solar initiative. At our most recent veteran’s install in June, we were fortunate enough not only to give solar to a veteran but to have an all veteran volunteer crew that represented multiple branches of the military.

Boman Rivers, who was referred to GRID through Habitat For Humanity, served his country proudly as a Navy Radioman from 1959 to 1963 on board the Destroyer USS Arnold J. Isbell, which operated mainly in the Western Pacific.  Mr. Boman received a 6.6 kW solar PV system that will help to offset more than 70% of his electricity usage.  Mr. Boman’s electric bill is unusually high due to special medical equipment in use at his residence. Cutting his bills in half will provide much needed savings.

Pictured from left to right, is the team of veteran volunteers who were more than happy to lend a helping hand to install solar for another veteran:

- Robert Guzman, a team leader at GRID Alternatives who served in the Navy as an Electrician from 1981 to 1985.

- Eric Mitchell, a Satellite and Communications Specialist from 2002 to 2007 with a combat tour in Iraq.

- Jerry Batucal, an Army veteran who served as an Apache Attack Helicopter Mechanic from 2009 to 2015 with two combat tours in Afghanistan.

- Mark Francis, a Navy veteran with over 10 years of service as an engineer. Mark served aboard the Austin-class amphibious ship USS Dubuque which operated in the Western Pacific.

- Lyanne Fernandez, a Solar Installation Supervisor (SIS) at GRID Alternatives Greater Los Angeles. Lyanne served in the active duty Marine Corps as a Weapons Mechanic from 2009 to 2013. She is currently in the Marine Corps reserves.

Other members of the install that are not pictured are Rudy Macias, Army veteran, Communications Field Wireman, and Loraine Jones Navy, veteran Electrician.