They already have the character, but GRID Alternatives is proud to see veterans advance their learning 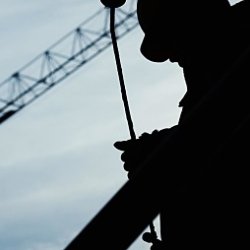 Yesterday, we celebrated National Hire a Veteran Day at GRID Alternatives Greater Los Angeles! Veterans can be both present and unseen in today's America. What can a mission-driven environmental and social justice organization like us do? When we think about an occasion like Hire a Veteran Day, there's a whole lot: speaking with advocates and recruiters, letting them know that employment for past and current servicemembers is part of our impact strategy; highlighting the voices of those who served, whether they saw combat or not; and doing whatever we can to constantly connect our vets to the skills that will allow them to participate in America's booming solar industry.

A recent story that we're proud to share centers on James Hurst, a locally-born and -raised veteran who discoverd a new way to leave his mark on the world during his internship time at GRID. As a funded trainee and member of our Project Management team, James had a bird's eye view of the solar business – including our busy residential program, right in the middle of the jam-packed spring of 2018. What allowed James to receive the maximum benefit from his trainee experiences in PM was what got him his GRID role in the first place: his military service and the life skills it imparted. He's living evidence that solar energy can help millenial veterans get on their feet and get their hands on gainful skills during the transition to civilian life.

James grew up in the Inland Empire and left his home in Yucaipa upon enlistment, eventually traveling overseas to Asia. For eight years of naval service, he was an asset to the nation doing mechanical work. Meanwhile, he prepared for a post-navy pathway into college. Yet with a combination of economic and personal pressures on his back, James wasn't able to get a handle on the right university education during his first few years back in the States. While he was a mechanically-inclined, experienced diesel mechanic, limited information for returning veterans had made it impossible to chart a path forward. James left school, entered the part-time labor pool in Riverside, and worked on and off as a personal trainer to make ends meet.

Can veterans, people with discipline and technical prowess, find it hard to make the shift? "That's the general problem with military veterans coming out of the service," James says. "A lot of those skills don't translate over perfectly to the civilian world, and then you get people who just can't get a job. Some become homeless or get put in a homeless veterans programs. For three years [of my life], I had nowhere else to go."

The first lucky break after a period of hardship came when program workers who assist vets set James up with his own apartment in West Long Beach—just in time for winter. Lacking a car or a job at that time, James felt like his barriers to self-sufficiency were daunting. But another lucky break arrived when our veteran liaison, Nick Boateng, came to his neck of Long Beach to do targeted outreach around opportunities in renewable energy. We need vets, Nick told the young men and women at his presentation, and we can get you training. He grabbed the audience's attention with statistics about booming employment and living wage careers, and a technologically-savvy vet like James made sense for Project Management.

We were able to overcome James' initial apprehensions about fitting into a new industry and its unfamiliar environments. With the mentoring available at GRID, he was able to add more value than he thought possible: 140 solar designs have his name on them. As James earned a paycheck and got to know more experienced designers, he was also helping cut through the fog of stigma and depression he'd experienced over the past few years, and feel out his undeveloped talents. That journey continues today.

As recently as 2017, James says, "I was kind of lost." Access to careers can be elusive for vets. "I wasn't sure what I wanted to do, and in some ways I still am … It's going to take way more than one company." But the great news is that James is stronger, more skilled, and more determined than he's been in years. In part because he has the strength of character that defines most of our vets, and in part because he knows the employment landscape better in his post-GRID life, James is ready to excel. He's been able to get the interviews with companies he's wanted to work for, and shows no sign of leaving solar.

"It turned out to be a great thing [for me]. I don't see the problems our veterans have going away. They're huge. But everybody in the PM department is nothing but awesome. And I ended up loving it as part of the family."