Highlights from Elijah Perry's Appearance on the Solar Now Podcast 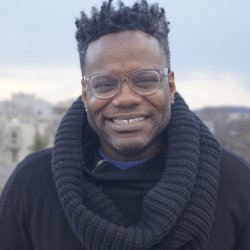 Elijah and Ronald touched on a number of topics, including Solar Works DC’s local impact, the importance of inclusion in the solar workforce (and ways to achieve it), and how to build trust in the community around the benefits of solar energy.

Here are highlights from the show:

About the Solar Works DC program

ELIJAH: Thanks Ronald for having me. We’re blessed to be able to partner with the Department of Energy and Environment to implement the Solar Works DC program. It’s a program we’ve been implementing since 2017 through the Solar for All program. Solar Works DC tries to increase participation for Black and Brown DC residents to be a part of the growing solar industry.

Since implementing the program, we’ve noticed that capturing the technical aspects of solar installation isn’t the (biggest) barrier (trainees face). As you probably know Ronald, they are facing a lot of life challenges in their communities or their own homes. Many don’t come from families or even have a home. Along with the technical piece of the program, we also bring a holistic approach where we provide life management and soft skills training as well.

The program has been putting out some great numbers. This year so far (as of August 31), we’ve already trained 73 folks in the hopes they will join the new green economy and become a part of the solar industry. Of those, more than 30 have received jobs.

About equity, inclusion, and diversity (EID) in the solar industry

ELIJAH: Through Solar Works DC, we’ve actually placed more than 170 program graduates into jobs or career paths in the solar industry. The numbers are great from that standpoint.

The numbers are completely different when asked how many people are still in those jobs as you and I are talking today. That number is very little to none. It’s because the industry lacks inclusion and any strategies around inclusion to actually allow Black and Brown or people of any gender identity or sexual orientation to see themselves in the industry. I think that’s super important. That’s not the responsibility of the individual, that’s the responsibility of the solar industry itself.

RONALD: How do we change people’s hearts?

ELIJAH: At Solar Works DC, we provide EID training to not only trainees but our employment partners as well to make sure the conversation is had on both ends. We can’t regulate someone’s hearts. But we can have a conversation that changes their minds, which ultimately does change their heart and the way they think about individuals.

A lot of issues highlighted in the Solar Jobs Census are around what policies are currently in place in solar firms. Only 31% of firms have strategies, policies, or programs to increase hires who identify as women. Only 26% have strategies to increase ethnic or racial minority hires, and only 8% have a strategy to increase LGBTQ+ hires. It’s all right there—strategies.

Change starts at leadership first. Leadership has to be bought into the concept of EID, particular inclusion. Diversity, you can put some clip art on your website and that shows external diversity. Equity, you can put something at the bottom of a job description that you encourage people and women of color to apply. I’m talking about inclusion. That speaks to how I, Elijah, feel when I show up to work. Do I feel included? Do I feel heard? Do I feel like I’m valued? We have these conversations with solar firms.

About building trust around solar in the community

ELIJAH: What we do is beyond workforce training. Trainees also receive a hands-on experience—they go into the communities that they grew up in and they’re installing solar on a home that meets those income guidelines.

One of the barriers our community engagement team faces every day is that (homeowners) think (no-cost solar) is a scam. Homeowners have been targeted in the past. When you’re talking about solar at no cost, they think, “There has to be a catch.” People have signed up for it in the past and a couple months later, they’re getting a bill—not a utility bill but a bill from the company. Building trust is a barrier.

When you’re trying to build trust, you don’t do it through words but through actions. I like what you said earlier about a holistic approach. That’s what we do at GRID Mid-Atlantic. We’re not just installing solar willy-nilly and collecting funding and grants from our partners. We’re being good stewards of that funding. What makes us different—we’re not in the same bucket as a for-profit company. We’re a nonprofit, and we’re focused on community development by providing access to solar energy and jobs to people that need them the most in our region.