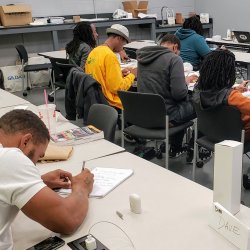 Twice a year, solar instructor Dr. Sean White takes a week-long business trip to Washington, D.C. — one of a handful of places he visits regularly while traveling the world teaching about photovoltaic (PV) energy systems.

White practically circles the globe teaching about solar installation. He visits China and Germany every year. He made a visit to Pakistan in 2018. In October, while on his visit to D.C., he received an invitation to teach a session in India.

His stopovers in D.C. are a part of the routine. Every spring and fall, he spends a week teaching about solar power to trainees in the Solar Works DC program: a 12-week job training program that prepares participants for careers in the growing and lucrative solar industry.

“What’s really awesome with this class is that it's a ton of hands-on — like, real hands-on experience,” White said about Solar Works DC on his latest visit to the nation’s capital. “Twelve weeks is a long time. A lot of my trainings are one week. I think it’s really good. The numbers I’ve heard are awesome — something like 50% of participants end up in the solar industry. It’s really life-changing for these guys.”

In the 1990s, White spent eight hours a day studying the science of solar. He started teaching PV classes at community colleges in California a few years later. Today he’s one of the world’s leading solar instructors.

White wrote the book on solar installation (quite a few, actually; here he is giving "Solar Photovoltaic Basics" to President Barack Obama in 2016) and helped write the test individuals must take to become NABCEP-certified solar installers.

A week of solar installation courses led by White — like getting a cooking lesson from Michelin-star chef José Andrés, or a pitching lesson from World Series MVP Steven Strasburg — is built into every Solar Works DC cohort. White’s instruction puts trainees on a fast track towards getting NABCEP certified, a crucial step for individuals looking to not only get started but advance in the solar industry.

The solar industry continues to grow as solar capacity grows. In 2000, White said, there was only 1 gigawatt (GW) of solar energy capacity in the entire world. At the end of 2018, that number had grown to 500 GW. The United States installed 10.8 GW in 2018 all by itself.

“One time I calculated the doubling rate to see how long it would take until every square meter in the world was covered in a solar module,” White said with a laugh. “At the growth rate we’ve seen, it might be 2070.”

The world won’t ever be entirely blanketed with solar panels, of course, but the Mid-Atlantic region, in particular, is a premier market for solar. Maryland and D.C. have huge financial incentives for installing solar, and Virginia’s recent commitments to renewable energy have it on the cusp of a solar boom.

Solar Works DC is a pipeline for D.C. residents to enter the solar revolution, but climbing the corporate ladder is a long process.

The importance of that lesson is why White visits the District twice a year on his way around the world.

“A lot of these things — becoming a solar installer, and that can lead to a designer — is something that all these people can do. They all have the ability, but they need to work hard at it.”

Solar Works DC is an initiative through Solar for All, a program of the District of Columbia’s Department of Energy and Environment, which seeks to provide the benefits of solar electricity to 100,000 low-income households and reduce their energy bills by 50% by 2032. The program, which was established by the Renewable Portfolio Standard (RPS) Expansion Amendment Act of 2016, is funded by the Renewable Energy Development Fund (REDF). For more information about Solar for All visit: http://doee.dc.gov/solarforall