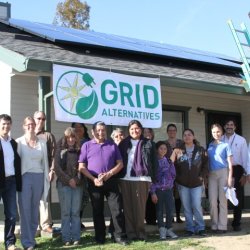 GRID Alternatives was recognized by the U.S. EPA Region 9 as a Climate Change Champion on Wednesday, February 26, 2013 in a ceremony hosted by the Hopland Band of Pomo Indians in Hopland, California. Speaking to an audience of tribal leaders, local representatives and GRID Alternatives clients, EPA Pacific Southwest regional administrator Jared Blumenfeld applauded GRID for both making solar accessible to low-income families and providing job training opportunities for workers across the state. "This organization is a role model for how business can promote solar energy while equipping Californians with the skills they need to sustain this industry," said Mr. Blumenfeld.

GRID has installed solar electric systems for 12 families on the Pomo Indian reservation in Hopland, for a combined lifetime savings of nearly half a million dollars, and has more projects planned for tribal members in the future.

"The Hopland Band of Pomo Indians has been pleased to have GRID Alternatives work with our qualifying tribal members to install the latest solar technology on their homes," said Shawn Padi, chairman of the band. "This green technology not only helps the environment but also makes [the families'] monthly energy bills much more affordable."

GRID was selected for the Climate Change Champion award from nominees received from businesses, government officials, tribes, media, academia, environmental organizations and community activists. Award winners are recognized for their commitment to protecting the environment in California, Arizona, Nevada, Hawaii, Pacific Islands, and on tribal lands.

"GRID Alternatives has been a leader in the solar industry and has ensured that some of the most disadvantaged communities in California are at the leading edge of the clean energy economy," said Ruth Valenzuela, Senior Field Representative for Assemblymember Wesley Chesbro (Assembly District 12). "It has been an honor to see some of the great work in action here in Assembly District 2."

Many thanks to the EPA for recognizing the importance of solar technology and solar jobs for all of our communities, and to the Hopland Band of Pomo Indians for their great hospitality!