Homeowner gets his "Cherry on top" 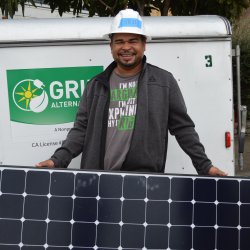 Steve (not Steven, "that was my father," he shares) has had a clear message for his kids their whole lives: "no matter what, don't sell the house." It's a home in the Bayview district of San Francisco with amazing views and has the character of a house that can only come from being lived in and loved. It's the house Steve inherited from his father Steven, and plans to pass down to his own children when the time comes.

As an electrician by trade, he's had a hand in many of the big projects we recognize in the Bay Area like the "new" Bay Bridge (which you can see from his house). But this time, he's helping with an even more local project: his own solar PV installation. On the foggy morning of the install a group of volunteers and Steve gather for the GRID safety talk while eating some of the largest donuts ever created - a "small" thanks for donating their Saturday to work. The fog is the first water that this new roof has experienced.

As part of GRID's partnership with the San Francisco Mayor's Office of Housing Solar Roof Retrofit program Steve received not only a solar PV system, but also was qualified for a new roof. There are many families, like Steve’s, that are unable to go solar because of aging or damaged roofs. Last year, GRID partnered with the San Francisco Mayor’s Office of Housing on a first-of-its-kind initiative to offer both a complete roof replacement and a new solar system all at no cost to 20 income-qualified homeowners, with 10 more planned for this upcoming year.

As the day of Steve's installation went on, people would pass by on the street and ask what was going on. Steve has told several of his neighbors about GRID's program, some of which may also qualify. "I'm so lucky," Steve admits, "I needed a new roof no matter what, and the solar is such a helpful cherry on top." By afternoon, the 2.2 kW DC system installation was finished (before the donuts could be finished - they really were that big) and the crew was awarded with a hello from some of the famous San Francisco parrots and some clearer skies.