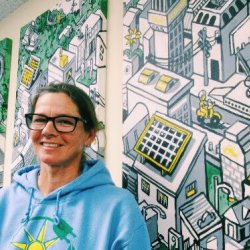 Welcome to the next installment of our new Staff Spotlight feature, where we share a brief interview to introduce you to some of our amazing staff members here at GRID Bay Area! This month we’d like to introduce you to one of our two new SIS's in Training, Amy. Her history includes adventures both abroad and at home, dedicated activism to stop oil drilling in the Pacific Northwest and expertise in electric work as crew lead for GRID partner, Habitat for Humanity East Bay. Thoughtful and warm, you're sure to learn a ton when you're on the roof with Amy. Keep checking back to meet more fabulous GRID Bay Area staffers!

“I first encountered GRID Alternatives when I was working for Habitat for Humanity EBSV as the electrical crew leader. The GRID crew rolled up with their trailer full of tidy, organized and well-labeled parts and tool bins, and I was impressed. The crew leaders were friendly and knowledgable and everybody seemed to have a good time. The more I found out about the company, the more interested I became. I left Habitat because I had an opportunity to move to a small mountain village in the state of Oaxaca, Mx., but sooner than I had hoped or planned, I was back in the US. After a few years of doing small construction projects for the Greenpeace equipment warehouses in Oakland and Washington D.C., I decided to pursue a longstanding interest in solar, having only ever worked with a few off-grid systems. That said, GRID was the only workplace that I actually considered applying, as the mission is the real draw for me.”

What is your favorite GRID moment?

“It wasn’t a particular moment, but working with Rising Sun so far has been the highlight for me, because meeting these folks and seeing their hunger for knowledge and being able to show them something - and then seeing them get it - it’s exciting! Also, I must mention the many delicious meals that have been prepared by gracious homeowners and tenants. Cooking is not my thing and being cooked for is one of the best things ever, and something I had no idea could happen as part of the installs!”

What is a fun fact about you?

“I was one of the ‘kayaktivists’ that, in 2015, went head-to-head with a towering Shell oil rig in Seattle. We stalled  them long enough that they missed leaving port at high tide and got stuck in a shallow area just outside the bay for another day in an already dwindling drilling “window” for the frozen Arctic. Though mostly symbolic, the action garnered a lot of press and public support, including internationally. A month later, I was on a bridge in Portland, supporting one of 13 climbers that dangled in front of the ship called “The Fennnica,” part of the same drilling fleet. This caused another delay, again more symbolic than logistical, but again featured prominently in the media. Shortly thereafter, Shell announced that they would scrap plans for drilling in the Arctic citing exorbitant costs, and public disfavor.”

What GRID Value most resonates with you?

“Equity. It’s important to me that we find ways to balance out the world ‘cause right now it’s so terribly imbalanced. For me it’s beyond the no-cost solar - it’s how I see the person, it’s how I relate to the person.. we’re equals. It’s a really important part of the job to me - is to recognize that. It’s only circumstances that have me as a GRID employee rather than a person receiving the services. Lilla Watson, an Australian Aboriginal artist once famously said, ‘If you have come here to help me, you are wasting your time. But if you have come because your liberation is bound up with mine, then let us work together.’ I try to always keep these words close so that I don’t fall into the delusion of ‘othering’ which is in the least case unhelpful and in the worse case, quite harmful.”