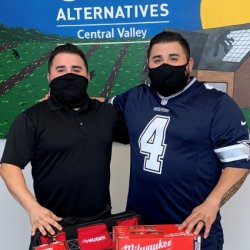 Twin brothers Mario and Jesus “Jesse” Venegas heard about GRID Alternatives Installation Basics Training (IBT 200) program in the Central Valley from their cousin. Mario said that the first thing that sparked his interest was that he wanted to do something that was new and exciting. He and Jesse have a cousin that is in the solar industry, and he told them that he went through the GRID Alternatives Training program to learn about solar and get the skills that helped him acquire his current position.

Mario said that his favorite part of the training was that his cohort was the first to be able to go out on an actual installation. Because of COVID-19, training on-site had been suspended and it is just recently that the Central Valley has received approval from our COVID Taskforce to allow training out in the field by following all the safety protocol established to protect everyone on the job site. He enjoyed going out and getting the actual hands-on experience.

When asked about his future, he said that he is excited because he will be able to move up quickly with his new employer. He has only been there for two months, and they are already training him to be a roof lead.

He was also excited when he and Jesse completed the training and upon acquiring a job, GRID Central Valley provided each brother with a set of starter tools. There are a lot of tools that the installers are required to have, but they are expensive and so he is getting them a little at a time. When asked in his interview if he had his tools, he could confidently say that he did, because of the tools provided by GRID.  https://youtu.be/AO2bx6irJ_c

With the information from his cousin to lead Mario and Jesse to the IBT 200 program, the successful completion of the training and getting a job in the industry, this is truly a story with a happy ending, but that is not where the story ends.  This really is a “all in the family” story, because at the time that I spoke with Mario, his brother-in-law was also a trainee with GRID and likewise heading for success.