Taking Steps Toward a Better Future 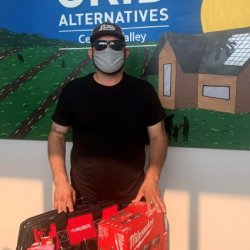 Juan struggled to acquire a full-time job. He would often find himself jumping from one part-time job to another and stated, “I could never get paid more than minimum wage in any job I had before, but since graduating from GRID Alternatives IBT-200 solar training in 2021, he has had four or five interviews with solar companies, and they all offered better pay.”

He recalls being in the car with his mother and girlfriend after the IBT-200 graduation and receiving back-to-back calls from employers who had attended the GRID showcase earlier that day and had observed the skills he had acquired during the training. “I was so excited! My mother and girlfriend were even more excited than me! I never experienced that in my life, it was an amazing feeling”.

Juan says, "When I heard about GRID, I was honestly excited, but I also doubted that it would change my life like it did". Challenges will continue to arise throughout life; However, with his newly acquired certifications under his belt, Juan is able to envision himself beyond his past limitations and take the steps towards a better future for himself and his children. He says, "Now when I see my kids, I can actually tell them that I have a good job, thanks to the training I got at GRID, and I'm thankful".