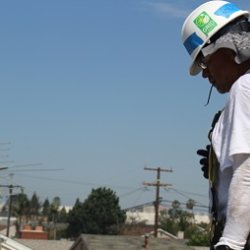 We believe that men and women who have paid their debt to society are ready to contribute to the public good, and that solar employment holds the key. Gonzalo Varela, a Greater Los Angeles re-entry trainee who participated our summer Solar Jobs Second Chances cohort, is shaping an exciting life for himself today as an electrical professional! Having completed his paid GLA training internship six months ago, Gonzalo's used the momentum to start his training in one of the largest unions in Los Angeles, the International Brotherhood of Electrical Workers (IBEW) Local 11. While spending more than half of his adult life behind bars was a challenge, he's now working steadily and reaching for success.

Born in Texas but raised in Southern California, Gonzalo was fighting to stay out of prison by the time he was 30. Because he was involved with criminal activity in his early adulthood, he didn't really have time to develop career skills. But when the State of California incarcerated him for almost three decades, Gonzalo began a process of personal reflection and reform. When he had the chance for release in 2015, he realized that work would offer an alternative to recidivism and sought help from organizations like GRID Alternatives and Homeboy Industries.

Workforce Development Manager Adewale OgunBadejo selected Gonzalo for one of eight funded positions in 2018 intended to provide formerly-incarcerated men and women a pathway to employment. Initially, the learning curve seemed daunting: Gonzalo had limited familiarity with the internet or mobile phones, much less energy. But mentorship by the GLA staff supported his perseverance and positive attitude. He learned to inventory GLA's warehouse inside and out, keeping our space tightly-organized and positioning us to be a more efficient installer.

Construction team members encouraged Gonzalo to pursue even more ambitious goals when his internship at GLA was over. Thanks to IBEW, he found a way. Gonzalo has been making steady progress towards becoming a journeyman over the last five months, and union training gives him access to math and science classes that expand his classroom knowledge. Meanwhile, he continues to work on a large-scale job site five days a week. "You know me," Gonzalo insists with a smile, "I'm always going to be early to everything."

Typically, Gonzalo works at the under-construction Los Angeles Stadium at Hollywood Park, a future home to our pro football games. Sometimes, he arrives in Inglewood for work before dawn – but nothing can put a damper on his attitude. Gonzalo knows that his biggest struggles are behind him, and he considers himself a living proof that paid training brings necessary opportunities to individuals who start feeling locked out of the traditional labor pool. "I've learned a lot about myself," he says.