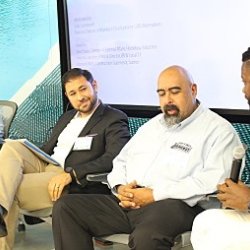 September has been a month of discussion and connections at GLA, where we've successfully launched our Los Angeles Energy & Equity Power Series (LEEPS) to talk about the most important challenges and opportunities that pertain to Los Angeles' solar industry in the 21st century. After the inaugural series event where stakeholders from across renewable energy, government, and housing covered maximizing the impact of solar on the communities housing low-income renters, we announced a day of panelists to explore reentry. Like GRID Alternatives teams in other regions of the United States, we're enthusiastic about the untapped talent that the solar industry can unlock in our recently-released men and women. Moreover, we feel that it's vital for employers, nonprofits, and society at large to be aware of the challenges individuals who have a history of experience with the criminal justice system face to be successful.

The second LEEPS event, Solar Jobs and Second Chances: Breaking Barriers to Employment for the Formerly Incarcerated, took place at LACI's La Kretz Innovation Campus on September 28. The topics that mattered today, which were explored by two moderators (Kimberley Guillemet, Director of Mayor Eric Garcetti's Office of Reentry; and Erika Symmonds, GRID Alternatives Director of Workforce Development), add a new dimension of depth to the work we're doing with the significant population of Los Angeles residents who are returning citizens. We place trainees in good-paying jobs throughout the year, and work hand in hand with the success of local organizations like Homeboy Industries that show a parallel commitment to employment for at-risk groups. As Jose Osuna, HBI Director of External Affairs, said on an afternoon panel, "There's a model we've followed for ten years now: really building a relationship with potential employers. Eventually that's what we really took to the next level."

LEEPS' reentry conversation was a powerful and successful morning because of panelists' willingness to challenge preconceived notions about what people impacted by the system need to achieve success. Early in our first panel conversation, founder James Anderson of The Anti-Recidivism Coalition pointed out that people of color have enormous potential to unlock in Los Angeles' workforce, and that it's institutional barriers like overincarceration that hold society back from seeing that promise fulfilled. David Rattray, UNITE-LA's Presdient and Executive Director and an Executive Vice Presdient at the Los Angeles Area Chamber of Commerce, cautioned us not to take away the wrong lessons from one unsuccessful reentry individual—every new hire should be allowed to succeed on their own terms. Later, Kenneth Wells (SunRun Construction Manager) described how the grit and drive he exhibits as a formerly-incarcerated man succeeding in solar allowed his regional team to move from the bottom of his company's pack into the top three. We enjoyed a morning speech of epic inspiration from reentry expert Joe Paul (Shields for Families) and celebrated our commitment to reentry hiring with a Homegirls taco bar.

Thank you to Liberty Hill for ensuring that we had the support for this unique event! Our partners at Los Angeles Metro Employer Advisory Council were ideal collaborators for this reentry-focused LEEPS day, and Mayor Garcetti's Office of Reentry Director Kimberley Guillemet were instrumental in ensuring the program was perfect. We hope the ideas discussed at LACI lead to thoughtful solar hiring and good-paying careers. Learn more about the direct training we offer at https://www.gridalternatives.org/get-training.