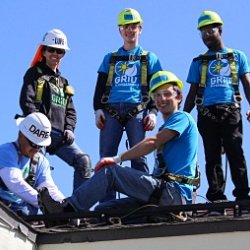 In March, the Greater Los Angeles office participated for another year in the greatest college tradition of all time: Solar Spring Break! As one of GRID Alternatives' premier service-learning programs, Solar Spring Break invites college students to install solar in underserved communities, while exposing them not only to the nuts and bolts of installation, but also environmental and economic issues that impact the communities we serve. We had the pleasure of hosting our first team ever from the University of Michigan (U Mich), followed by our third team in a row from the Massachusetts Institute of Technology (MIT).

Instead of partying on the beach, these students learned the basics of being a GRID installer, from bending conduit to wiring inverters! This year, the service-learning aspect of their trips focused on the effects of neighborhood oil drilling in Los Angeles. Through a workshop created by Amy Wang, our Workforce Development SolarCorps Fellow, students learned that one in three Angelenos live within a mile of an oil or gas well—and that over 90 percent of people who live within a ¼-mile of a well are people of color!

Later that day, from the rooftop of Esperanza Community Housing's Alegria building, students saw the real-life impacts of neighborhood drilling. Alegria sits across from the temporarily-closed AllenCo Oil Well, which is notorious for causing nosebleeds, headaches, and respiratory problems in the surrounding community from 2010 to 2013. Esperanza's Environmental Justice Campaign Coordinator, Hugo Garcia, and Executive Director, Nancy Halpern Ibrahim, spoke to students about how the community mobilized for permanent closure of the well. While on the roof, students also saw a 35-kilowatt GRID system installed for Esperanza, a promising example of how we can prioritize frontline communities in the transition away from dirty energy. Students then visited Homeboy Industries, where they witnessed how much Homeboy’s supportive services have improved the lives of gang-involved and formerly-incarcerated people.

Once they arrived at their installs in Long Beach, both teams saw the lessons they learned on previous days brought to life! Students walked past active pump jacks just blocks away from their installs, and they learned the ropes of solar installation from Homeboy Industry graduates. They also had the chance to connect with homeowners who had deep roots in their respective communities, including the United Cambodian Community of Long Beach. Spring Breakers even caught the attention of local news outlets, including the Long Beach Press-Telegram and Spectrum television!

By the end of their five days with GRID, students were inspired to learn more about fossil fuel extraction in their home states, to make sure their future employers hire formerly-incarcerated individuals, and to encourage their friends to apply for Solar Spring Break next year! Thank you to the students at U Mich and MIT who helped organize these trips, and a special thank you to Wells Fargo for your continued support of the Solar Spring Break Program.