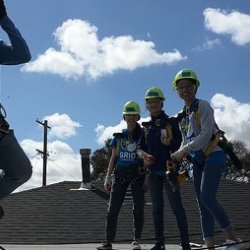 For two spring weeks, the GRID Alternatives Greater Los Angeles office had the treat of hosting some houseguests! They weren't the usual tourists in town for the weekend, though—actually, these were groups of students flying in from the East Coast to learn about GRID on Solar Spring Break, sponsored by Wells Fargo. Los Angeles welcomed its first group ever from North Carolina's Duke University – bright, enthusiastic students from all walks of life who were eager to serve! And we saw the same enthusiastic attitudes from our Massachusetts Institute of Technology vistors. (It was our second year in a row with MIT, thanks to welcome partnership with the MIT Energy Initiative.)

If you're a college student who loves science and technology, spending a week in Los Angeles isn't exactly, well, "roughing it." But an alternative spring break offered these young people, and eighteen other participating institutions nationwide, something that's hard to come by—real-time exposure to solar careers and impact. Seeing everything that makes an office like ours function, from project design to warehousing, produced a deeper understanding of solar careers. It all arrives through the lens of a not-for-profit organization committed to environmental justice and social change wherever we operate. That means that we don't just want students who were in California for their first trips ever to snap photos as siteseers; instead, we want them to leave Los Angeles with GRID perspective about why low-income solar matters, and why renewable energy should reach disadvantaged populations with the benefit of widespread community support.

Solar Spring Break students were asked to put themselves in the shoes of social entrepreneurs, like those whose talents enable us to have Mercado La Paloma in Los Angeles. (We enjoyed lunches here, too!) At another point, we walked them to the main offices of Homeboy Industries, our longtime partners, and discussed what they'd learned in the aftermath of a Homeboy tour. Our hope was that these potential changemakers got to have a week where their preexisting interests – in energy, innovation, and knowledge about how things work – would be enhanced by perspective on why things work the way they do. Each student had a chance to leave California with some hands-on experience in solar plus a sense of where this fast-growing industry plays its role in making a better world.

And that hands-on experience? In true GRID fashion, it involved putting a completed, no-cost solar photovoltaic system onto the roof of a deserving homeowner. Our work installing on the roof of Pasadena retiree Deborah Ducre, which made the local paper that week, allows someone to live more comfortably in the house she was born in all those decades ago. And it left an impression on the participants that will inspire them to volunteer more in the future ("My absolute favorite part about this trip was the chance to meet the homeowner," said one Duke Spring Break student). Bravo! (Check out video coverage of the project by Pasadena Now to watch MIT at work. Our 2018 Solar Spring Break was featured earlier in an in-studio interview on KABC and covered by Telemundo 52!)

P.S. If you feel the same way the individuals who visited us on their Spring Breaks do – that a solar career presents opportunities – then our upcoming Solar Career Fair is a great event to check out!