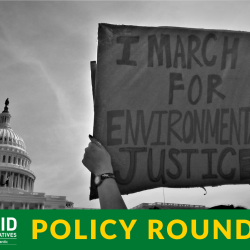 This is the February edition of the GRID Mid-Atlantic Policy Roundup, keeping you up-to-date on renewable energy policy that promotes equity in the District of Columbia, Virginia, Maryland, and nationally.

It's been a quiet month on the policy front in DC, but there's been more than enough to make up for it in Virginia and Maryland, where state legislative sessions are in full swing. Fortunately, many of the bills that are still alive in Virginia are focused on not just clean energy, but making clean energy equitable. Maryland, too, has been active on the clean energy front.

Let's start with an update from Virginia:

The Virginia Clean Economy Act (VCEA) was passed by both the Virginia House of Delegates and Senate on Feb. 11, which means each chamber’s (slightly different) version of the bill will now cross over to be heard in the opposite chamber. The bill includes one of the most ambitious state-wide renewable portfolio standards (RPS) in the country, requiring Dominion Energy to source 100% of its energy from clean sources by 2045 and Appalachian Power Company to do the same by 2050.

VCEA has a strong focus on equitable clean energy access for historically disadvantaged communities, including such measures as:

A number of other bills focused on renewable energy and environmental justice were also passed in the first half of the session and will now go to the other chamber for review. Those bills included provisions that would:

In non-solar news, last month, Virginia became the 38th state to ratify the Equal Rights Amendment. The amendment missed the initial deadline needed in order to be added to the Constitution, though many in Congress are pushing legislation to remove the deadline.

The legislative session in Maryland has also been active on the clean energy front. For example:

More info on solar jobs from the report:

Solar continued to grow in most states within the Mid-Atlantic region. Solar jobs: