Working For a Better Life in Reentry Through Solar Works DC 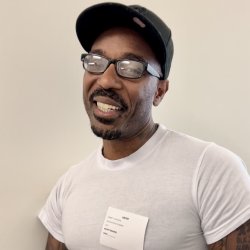 Robert Richards, a native Washingtonian, says his 12-year old daughter is the greatest passion in his life.

Earlier this year, Robert went with a friend to the DC Infrastructure Academy with a plan to sign up for a workforce training program. When he arrived, he saw the option to learn about solar workforce training and decided to join the Solar Works DC program then and there.

That was one of the first steps in Robert’s reentry process after spending the previous 10 years incarcerated on drug charges. He said his daughter influenced him to do something positive for his career.

“I want my life to be better so her life can be better, so she won’t have to grow up like I grew up,” Robert said.

Over six weeks, Robert participated in a solar installation, which gave him a taste of what it might be like to work in the solar industry. He also received preparation to pass the NABCEP PV Associate exam, which demonstrates to employers that you have the skills necessary to work as a solar installer.

“The time I spent in the program changed the way (I think about my career) because now I know that it’s doable,” Robert said. “It’s the first time I got on the roof, got on the harness. I was comfortable up there. I seen the install. I thought it was going to be harder than what it is and I know I can do it.”

Robert was a model trainee during the program, earning acclaim from his workforce training supervisors. They praised his work ethic, his punctuality, and his dedication—over six weeks, he showed up to every class on time, took diligent notes, and asked many questions.

“Bob was laid back in his own style—when the program first started, he was quiet,” said Michael Gaskins, GRID Mid-Atlantic workforce training supervisor. “Once he got the feel for everybody, he started to become more talkative. He took the whole program serious. Once the ice was broken, he was cool as ice.”

On graduation day, GRID Mid-Atlantic’s training supervisors presented Robert a gift to acknowledge his hard work in the program: a power drill with attachments, a hammer, and a pry bar.

“I knew it was an opportunity for me because I saw solar as the future,” Robert said about Solar Works DC. “There’s so much and I’m just trying to learn as much as I can. Even though I just started, I’m really trying to learn and I guess when I get more experience I can really see what I really like. But I want to learn everything about the business.”

Learn more about Solar Works DC and how to apply!

Solar Works DC is part of DOEE’s Solar for All program. Solar for All seeks to provide the benefits of solar energy to 100,000 low-income households and reduce their energy bills by 50% by 2032. The program, which was established by the Renewable Portfolio Standard (RPS) Expansion Amendment Act of 2016, is funded by the Renewable Energy Development Fund (REDF).