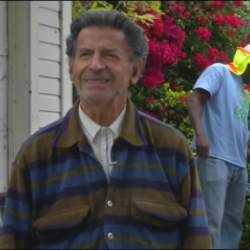 When Juan Soto arrived in the Bay Area as a political refugee from Chile nearly 30 years ago, he seized every opportunity he could to make a better life for his family.

After working for a printing company where he learned English, Juan settled into a successful construction career. "So many great times for my family here, but there have been some that were not so good," he shares.

With the unexpected losses of his son and grandson, Juan, now retired, found it difficult to keep up with household maintenance and costs such as a leaking roof and increasing utility bills. When Juan heard about GRID, and our pilot program in San Francisco to help with roof replacements, he saw a way to once again support his family through difficult times.

There are many families like Juan’s that are unable to go solar because of aging or damaged roofs. Last year, GRID partnered with the San Francisco Mayor’s Office of Housing on a first-of-its-kind initiative to offer both a complete roof replacement and a new solar system all at no cost to 16 income-qualified homeowners. You can learn more about the program -- and see Juan’s solar install in action -- in this ABC7 news report.

"I'm very grateful for GRID. The bills were going up and up each month -- now it will be better," says Juan, explaining that they'll put their energy costs savings toward other bills, or perhaps to visit family back in Chile.