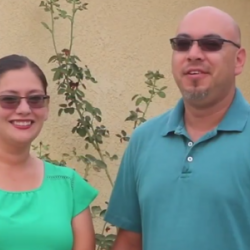 They just achieved the American dream of homeownership, Linda and her husband, Luis purchased a home in Porterville, California for their energetic family of six. Moving from an apartment to a house was a big step for their family which took three months and had some unknown factors, such as the cost of the utilities. Previously, they were managing the apartments that they were living in, so the payment of utility bill was included as one of the benefits of living and managing the apartment complex. Then Luis received notification that he had been laid off from his job and the couple were concerned that Linda’s job in the food industry wouldn’t pay enough to handle the expenses of owning a home and paying high utility bills. They just bought their house and now they were going to have to live on a reduced income. They were worried, not knowing what the bills were going to be and the loss of a job made their decision to purchase a home very stressful.

Unexpectedly, Linda and Luis were referred to GRID Alternatives by a friend. Although they had some people telling them that it was a bad idea, Linda googled GRID Alternatives and did some research to make sure they knew what they would be getting in to if they had GRID put solar panels on their new home. They decided to take plunge by talking to Hector Uriarte, one of the Outreach Specialists at the Central Valley GRID office regarding qualifying for the program. Since having their panels installed Linda and Luis have given Hector three leads and in return, they have received the referral reward for the completion on the installations from the referrals.

Linda says that she would do it again and they are glad that they said “yes” to the program. She still sets a side additional money in preparation for the annual true-up, but Linda said, “my utility bill is smaller than my monthly trash bill” and during the summer the family can keep their home comfortably cool. She also wants to share with others that are considering having solar panels installed with GRID that they were able to refinance their home without any problem.

Since they want to get the best energy efficiency out of their solar panels, they clean them on a regular basis assuring they are getting the most out of the sun.