Los Angeles' Biggest Solarthon and a Salute to Veterans! 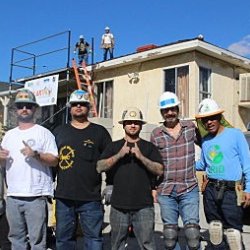 Read more about how Solarthon began this year.

GRID Alternatives Greater Los Angeles showcased the diversity and breadth of its efforts across the City of Los Angeles during a week-long Solarthon whose proceeds support vital solar access and job training. We're proud to report that almost twenty-five kilowatts and hundreds of volunteer hours later, Los Angeles Solarthon 2017 is a resounding success!

Solarthon is GRID Alternatives’ flagship community install event, bringing together people from all walks of life – including individual volunteers, corporate sponsors, and community leaders – and with the completion of this achievement low-income residents of L.A. will unlock over $200,000 in lifetime savings. In recognition of Veterans Day on November 11, it was also the GLA team's intention to connect veterans to our work, and former servicemembers Leo Gonzalez in El Sereno, Andres Lucio of Leimert Park, and Chrishawn Tyler in South Los Angeles were honored recipients on multiple Solarthon days.

Capitalizing on the support of an engaged Board of Directors, half a dozen corporate sponsors, and supporters from the community, ten homeowners who qualified for solar through our single family program were the beneficiaries of our record-setting annual event. Cypress Creek Renewables, Foley & Lardner LLP, KPMG, and the Los Angeles Kings brought their A-games to the roof as corporate sponsorship teams installing on individual houses, while Toyota provided a matching sponsorship to help one of projects, and IBEW Local 11 journeymen dedicated a weekend to installing the largest system of our ten. For Cypress Creek of Santa Monica, and for Toyota, a major employer in the Los Angeles Metropolitan Area, L.A. Solarthon 2017 was the first project giving them an opportunity to support GRID. Our office raised about $40,000 with the support of these generous givers, and many others from our community!

"The Los Angeles Kings were thrilled to partner with GRID Alternatives on Los Angeles Solarthon 2017," noted Gabe Gelbard, Assistant, Community and Player Relations. "It’s a rewarding experience for our staff, who volunteer their time to take part in this event each year, and we look forward to the moment when power is generated through this house's new panels."

We're so proud to have created a record-setting event in the City of Los Angeles, and to have developed rich community partnerships that were highlighted across the city when visitors saw our work on the houses. Thank you to everyone who made Solarthon possible!