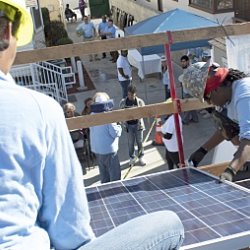 Clean power from the sun isn't just the property of one particular group or specific type of people – it's a vision for #EnergyJustice that promises to uplift people of all races, genders, and levels of economic need. That's a fundamental truth that's especially important to consider this time of year, as we reflect on the vision held by Dr. Martin Luther King, Jr.

The "oldest and boldest" group of civil rights advocates in America, the NAACP, launched its 2018 year of advocacy for communities on the front lines of threats from climate change with a solar installation by GRID Alternatives Greater Los Angeles. The event brought together fighters for justice from across California and the nation, acknowledging that our solidarity is required to deal with the present day's environmental and economic crises. GRID Alternatives is also a participant in the NAACP's larger climate justice push, whose year of work began with this event. The Solar Equity Initiative promises to bring job training to people of color and low income communities throughout next year, while ensuring that those same populations see more solar installed on their residences and community centers.

As NAACP President and CEO Derrick Johnson has insisted, "Underserved communities cannot be left behind in a clean energy transition." The NAACP has noted as much many times in the past: "Communities of color and low income communities, as well as population groups such as women, consume the least energy, but are most disproportionately impacted, suffering poor health outcomes, compromised education, loss of livelihoods and loss of life as a result of exposure to toxins and the ravages of climate change." We were humbled to give NAACP Chairman of the Board of Directors Leon Russell his first experience on an install roof, and to have him as an honored speaking guest with President Johnson during the event on January 13.

Along with allies like Jacqui Patterson, Director of Environmental and Climate Justice at the NAACP (as well as a force behind this project), we're committed to continuing our work on a renewable energy revolution that includes those in greatest need. The Solar Equity Initiative kickoff, held in L.A. the same weekend as the 2018 MLK Day of Service, is a prime example of the power we have when groups from across our community come together. As a result of our installation, a new solar photovoltaic system completed at no cost will also benefit Jenesse Center, Inc., the oldest domestic violence intervention and prevention program in South Los Angeles.

Read the NAACP's project announcement here. We are deeply appreciative of the partners who supported this event and made a launch event at Jenesse possible: Jinko Solar, SEIA, Sunrun, Vote Solar, and United Methodist Women.