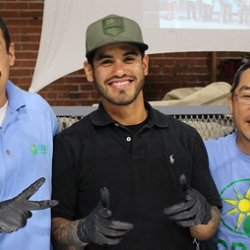 Salvador Miranda, an L.A. native currently serving as GLA's SolarCorps Construction Fellow, sets an example for everyone. He started attending local vocational school to learn about renewable energy when he was in his 20s, following his sister's advice (she had seen a video about GRID Volunteer Training Coordinator David Andrade and encouraged Sal to take solar classes). Getting arrested derailed Sal's studies, and he had to wait for a few years to return to solar while finishing incarceration. But when he got out and landed in South L.A., he realized that he wanted more skills and gave David a call.

Not long after his first install in Pasadena, Sal had a sense of all the ways his hands-on training work at GRID could make neighborhoods like his better. GLA's Multifamily program was bringing solar to housing operators, helping to keep deed-restricted housing affordable. Our single-family builds brought green energy to communities historically burdened by industry and pollution. And even our newer work, like an electrical vehicle charger installation that Sal participated in, continued closing access gaps for low-income families. GRID's triple bottom line of people–planet–employment changes L.A. in powerful ways.

As a formerly-incarcerated trainee who was serious about installation, Sal was a natural choice to be picked for our first paid cohort of re-entry interns. That 2018 term led to a position with SolarCorps, where more extensive time with GRID helped him accomplish greater impact. "Even when I wasn't getting paid, I still enjoyed this," he explains. "I guess from being in fire camp [during my sentence], that's where I got it. When we came back down from the mountain, people said, 'Thank you so much—you saved our homes.' I realized I liked helping people."

Helping people is just the beginning for Sal. As part of our team getting more than 5,500 kilowatts installed region-wide, he's a living model of exactly what service to community means. As we celebrate America's transition to a 100%-renewable economy, here's to the individuals who are serving terms with SolarCorps and similar programs to accomplish so much!

The SolarCorps Fellowship Program is part of the AmeriCorps network of programs.  SolarCorps is made possible with funding support from AmeriCorps, AmeriCorps VISTA, and Bank of America. AmeriCorps is a program of the Corporation for National and Community Service, the federal agency for volunteering, service, and civic engagement. CNCS engages millions of Americans in citizen service through its AmeriCorps and Senior Corps programs and leads the nation’s volunteer and service efforts. For more information, visit NationalService.gov.