Volunteer Joshua Ogle is a hiring manager in the industry, looking for trainees like himself 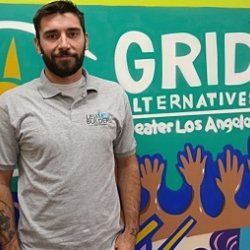 GRID Alternative' focus on Workforce Development has helped over 400 individuals get into solar career paths, many without solar experience or even a preexisting track record in construction. Joshua Ogle isn't unique as a success stories that GRID has played a part in, but he stands out because of his commitment to thinking big about opportunity. Through Joshua's success, he's been able to build a vibrant solar career for himself and help others get their start! Whe he stopped by GRID this month, we sat down with him for an update.

Joshua's background includes challenges, but his drive made him an early reentry success for our program. In early adulthood, spending about a year in prison and prompted him to decide that a change was necessary. He began to participate in programs available to him in the system to learn about better options, and considered his path forward once he got out. Josh ended up at Homeboy Industries once outside, where he enrolled in a program that helps people get ready for solar training by taking classes at the local East Los Angeles Skills Center. After finding some early success, he enrolled in more classes that would help him get the certifications needed to begin working doing solar installation.

While attending classes, Joshua was encouraged to get hands-on experience through GRID Alternatives. He came to Workforce Development Manager Adewale OgunBadejo and joined the volunteer program, where he got the direct experience necessary to further his insight into the material he was learning. "It was great having the hours working with GRID," Joshua remembers. "I got a lot of great experience that proved valuable when I got to my current job."

By sticking to his plan, remembering his priorities, and staying true to the vision he had for his life after prison, Josh has avoided recidivism and launched a successful career. He works for Levis Builders, a local company with solar and other services. He mentioned several times during our discussion that the training he received at GRID was key part to his success at his current position, where he's been for just over a year. Joshua's receieed several promotions that he credits to both soft and hard skills developed in training: "The confidence I have now to do any job on the site came from GRID."

While Joshua received training in all aspects of the solar industry during participation in GRID Alternatives projects, his new line of work requires him to develop more independence than ever before. Holding responsibility is a highlight for him. Asked about his favorite part of his current position, Josh says, "[It's] when I am completely put in charge of a project. It is great knowing that I can be accountable for everything that needs to get done and complete it with a high customer rating."

And while Joshua has seen how some differences stand out in the for-profit solar sector that he didn't see at GRID, he considers himself to have made a successful transition. At his current level of success, he's able to interview and make offers to younger and less experienced installers. On more than one occasion, he's reached out to Adewale to find the candidates he needs and help them secure an employment path.

It's all part of building a solar industry that power (and empoweres) Los Angeles. "I had a lot of fun working here," reflects Joshua, remembering the challenges of moving in the right direction. "The more I worked at GRID the better I was prepared for the real world."