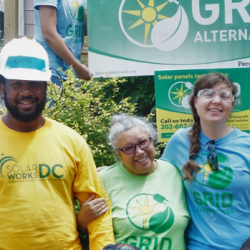 For Women’s History Month, GRID Mid-Atlantic has been celebrating the efforts and excellence of women in solar through our Women-Run-Power campaign. Ramonita Ramey, a GRID client who lives in Northeast D.C., worked in solar a little earlier than the rest of us. To be precise, she got a job making solar cells in a Maryland factory 43 years ago, long before rooftop solar power became popular.

“The first cells I was working on were the little cells for flashlights or small radios and stuff like that,” Ramonita said, describing her old job. Over the next few years, Ramonita gained experience and began working on larger and larger cells, until she and many of her colleagues were unexpectedly laid off.

With three kids to feed, Ramonita needed to find a job fast. “It wasn’t just me, it was quite a few people that got laid off [...] I went to the newspaper and the first thing I saw, the first thing I put my finger on, I called in a hurry,” she said, “It was a babysitting job, it paid me good.”

Ramonita worked the next 31 years as a caretaker before deciding that it was time to retire. In retirement, however, her limited income made it difficult to pay an expensive monthly energy bill. Ramonita paid a visit to Pepco to see if she could figure out a solution, which is when she learned about Solar for All, the District’s program to provide 100,000 low-to-moderate income families with clean energy.

Solar technology has grown up quite a bit since Ramonita had her job making cells for radios and flashlights, and in 2019, she received no-cost rooftop solar installed by GRID Mid-Atlantic. She’s been happy with her solar ever since. “My electricity bill before they installed [solar] was $700 to $800 a month,” she explained. “Now my bill only goes to $300. That’s a lot of change that I have saved.”

Ramonita recommends solar to everyone with high energy bills. The good news is, you don’t need to go to Pepco to apply for no-cost solar with GRID - just fill out this application to see if you qualify.