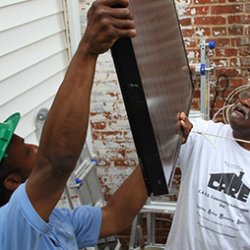 It has been a good week for 74-year-old Leonard Wills, an Army Vet who has lived in Baltimore just about his whole life. On Tuesday, he was recognized by Mayor Stephanie Rawlings-Blake as one of Batimore’s “Top Neighborhood Dads” an annual honor given to “strong and dedicated Baltimore men who play an active role in making their communities better, safer, and stronger.” And on Thursday he stood in front of cameras again as a solar pioneer, the first in East Baltimore’s C.A.R.E. community to go solar with GRID Alternatives thanks to a 10-home pilot, in partnership with the city, that also includes cool roof installations and a battery back-up system on the local community center.

Government and community leaders, neighbors and other supporters gathered at his home to celebrate the installation, GRID’s first in Baltimore, and watch the panels get lifted to the roof. Though he didn’t mind the fanfare, the best part for Mr. Wills is going to be the savings.

“I’ll use them for something I’ve really been wanting to do, some repairs on my house,” he said, noting that the siding has been leaking for some time.

Mr. Wills’ system was installed by job trainees from Civic Works, a local job training organization that has been doing weatherization work around the city, and will be installing all the cool roofs in preparation for the solar installations. 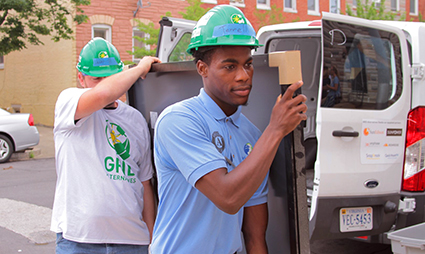 Terrell Smith, one of the Civic Works job trainees, was excited this project was coming to his neighborhood. Terrell lives about 2 blocks from Mr. Wills, and he’s passionate about inspiring other young people to pursue careers that have a positive impact on the world.

“I grew up and I saw violence around me, and being violent and in the streets was just never for me. For people my age, it’s most important to see the different job opportunities there are,” he said in the alleyway during a short work break. As he was being called back to work, he shared a hope he has for everyone in his community: “Believe in yourself. When you believe in yourself the opportunities are limitless. There are so many different pathways in the world.”

Thanks to the many organizations that welcomed GRID into Baltimore for this incredible first project and made solar possible for Mr. Wills and his neighbors, including the Abell Foundation, the Baltimore Office of Sustainability and the Baltimore Energy Challenge, Civic Works, and Constellation, an Exelon subsidiary, which sponsored our launch events this week.