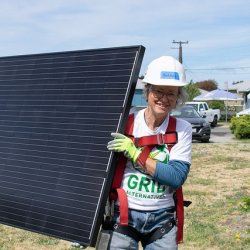 Below is a guest blog from Barbara Postel, a resident of the Atchison Village community where GRID held it’s 13th Annual Solarthon event. Barbara, whose solar system had been installed prior to the event, spent her Saturday giving back to GRID alongside the team of Solar Champions who had fundraised in support of the event. We are so lucky to have amazing people like you in the GRID family, Barbara!

Grateful for a dream come true -- to install solar panels myself at Solarthon and have a hand in the green energy revolution. In fact, the GRID crews had done the hard part before the June 9th event, laying out and installing the railings, conduit, electrical boxes. We got the glory: installing and wiring the microinverters, then connecting and installing the solar panels which is so interesting and FUN.

Humbled by filling a last-minute open slot amongst GRID’s Solar Champions team who were installing on a one-story fourplex in the Atchison Village community at Solarthon. Each of them had raised over $500 over the last few months to support GRID’s work in the Bay Area, and one of them, Rosana, had raised $7,346! Yes, only in the last few months! In her nine years of being a lead Solar Champion, Rosana has raised over $50,000! See how she did that here.

Awed by my glimpse behind the scenes at what it takes to get this green energy revolution rolling. Persistence, embodied by our beloved Carmen Zamudio, the Outreach Coordinator who serves as the main client contact for all of the Atchison Village community, and really the whole GRID team. Many of the GRID staff at Solarthon came from afar to support at Solarthon. The Construction Intern supporting our team, Aaron, came from Navajo lands in New Mexico, where he first trained in solar installation with GRID. He is now newly hired, stationed at GRID’s North Coast office Willits. GRID is a magnet for interesting and involved people like Aaron.

The City of Richmond, too, has championed and facilitated the effort of bringing free solar to its low income residents. At Solarthon, there were also teams from Sunrun, Enphase, Google, Tesla, SunPower and more, all of whom support GRID’s work in a big way.

Giving to GRID, even in small amounts, truly helps this green energy revolution roll on and I, for one, will be doing just that.

You can read a recap of Solarthon here or join Barbara in giving here and become a Bay Area Member!