A Solar Homecoming for 10 Novato Families 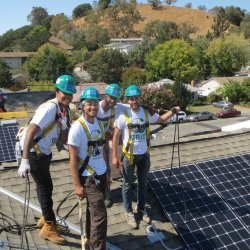 This summer, 10 Novato families not only unlocked the front doors of their new homes with Habitat for Humanity, but they also unlocked solar savings on their utility bills.

Mt. Burdell Place in Novato is Habitat for Humanity’s first multi-family development in Marin County, an area known for both its natural beauty and record-breaking high housing costs, with current median single-family homes listed for $1.25 million. The 10 low-income families, many of which have called Marin home for decades and feared displacement, received the keys to their new homes at a special dedication ceremony this past July.

The homes were built through thousands of volunteer hours and “sweat equity” from the new homeowners. GRID was honored to be a part of the volunteer efforts to make Mt. Burdell Place a GreenPoint Rated development by installing a 2.7 kW solar system on each of the 10 homes. 9 of the homes were completed all in one day at our 2016 Solarthon with the help of over 130 volunteers!

As if the relief of achieving homeownership wasn’t enough, each home’s solar system is also estimated to produce over $25,000 worth of clean energy over its lifetime. For the Camp’s, one of the new families, these utility cost savings will serve as a critical source of financial stability as they celebrate their youngest son’s remission from leukemia and get their family life back to normal.

GRID thanks all of our hard-working community volunteers, corporate partners, and job trainees for their efforts in making rooftop solar the icing on the homeownership cake for these 10 Novato families.