A Leader in the Community 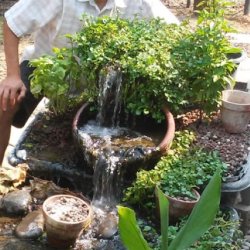 Ivan is a GRID client and passionate community advocate of our program who was instrumental in getting solar installed on 40 homes in his neighborhood with GRID. Currently, he is block co-captain along with his wife, a Hmong resident and a first generation Mexican in his community neighborhood of homes and a senior villa. He wants to make sure to be unified in his community.

He has twenty years of experience in social services with a Masters in Christian Ministry and another Masters in Curriculum and Instruction. For the last six years he has been a teacher with the County of Fresno working in low-income neighborhoods predominantly teaching the fifth grade and emphasizing math which is his passion. He thinks students need to understand conceptional math, trying to teach our young to understand it conceptionally, not only practically. He asks the question, “How do we empower communities of need, which don’t have the resources some communities have for their schools?”

Ivan has three children, and each developed their own identity. One of his daughters has embraced history, his son has an affinity for engineering, he is also the leader in the pack that is able to manage money and his other daughter has an artistic flare. Early on, he shared ideas with his children regarding financial literacy and keeping track of their money and he thinks it’s important to instill in our young the importance of where their money is being spent. He let them know that as parents, he and his wife would provide for their needs, but they would have to save for the wants.

We truly appreciate all that Ivan Lopez brings as our Acting Treasurer to the GRID Central Valley Board of Directors.